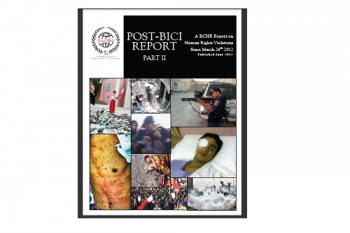 A BCHR Report on Human Rights Violations Since March 26th, 2012

18th June 2012 (Copenhagen) – The Bahrain Center for Human Rights (BCHR) publishes their second edition of the post Bahrain Independent Commission of Inquiry (BICI) report, a report on the ongoing human rights violations in Bahrain since March 26th 2012. According to this second part of the post BICI report, there remain to be no meaningful improvements made to the human rights situation in Bahrain. The findings in this report even show that on many levels the situation has become more serious. Mass arrests and detention in a violent fashion, namely beating and insulting detainees at time of arrest and beating detainees to the degree of bleeding in public, are still ongoing. In many cases detainees continue to be deprived from access to family and lawyer in first days following arrest. Children below the age of 18 are not excluded from these types of arrests. Also, recent arrests included human rights defenders, activists and journalists with the latest cases recorded May 2012. There is a clear escalation in the arrests of persons the government did not arrest even within the height of the crackdown last year. In general, in April 2012 alone BCHR has recorded 100 cases of arrest and detention. The BCHR continues to receive cases of torture in relation with the detentions (formal and informal). The latest case is from the journalist Ahmed Radhi, arrested on the 16th of May 2012, who, according to a letter he wrote, was physically and psychologically tortured, heavily insulted and beaten throughout the interrogations. In the cases of the detainees that have been released, hundreds of them are still facing trials at the civil and military courts. Once again, these ongoing trials include children aged under 18 such as 11 year old Ali Hassan who is due in court this month on charges of “illegal gathering” and “disturbing the peace”. More generally, the findings of the second part of the post BICI report documents an increase in the Bahraini government’s attacks on all aspects of the Bahraini society, religious freedom is being attacked, government employees are being dismissed, students and medical professionals as well as civil associations are being attacked. The use of excessive force against protesters and the attacks on civil liberties have worsened. Hundreds of injured in Bahrain remain with no access to medical care as the military still controls the central hospital in the country. The findings of “Post BICI Violations Part II” show that due to what seems the lack of international inaction there appears to be no incentive for the Government of Bahrain to implement the recommendations of it’s own report. The Bahrain Center for Human Rights (BCHR) republishes its concerns and recommendations in the second part of the part of the post BICI report. Among these recommendations are the immediate suppression of the violent repression of peaceful protests, the unconditional release of political prisoners, the cessation of torture practices and harassment against human rights activists and media workers. The Bahraini government needs to be held accountable in a way that would put on trial all those accused of wounding, torturing and killing civilians as well as those who have authorized such crimes. For more details, look at the newly released second part of the POST BICI report Contact: For general comments or inquiries about the BCHR, please email: info@ bahrainrights.org. Further questions may be directed to: Maryam Al-Khawaja, Acting President: maryam.alkhawaja@bahrainrights.org Tel: +4581757959 On March 2012 the Bahrain Center for Human Rights (BCHR) has published the first report on violations to human rights that took place in Bahrain after the issuance of the report of the Bahrain Independent Commission of Inquiry (BICI) that was appointed by the King.