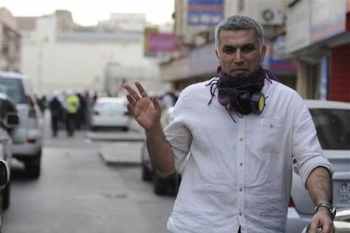 Update 24 May 2014: Nabeel Rajab has been released after completing 2 years in prison

Update 4 Dec 2013: The Observatory: Bahrain: The court's decision not to grant Nabeel Rajab an early release is flawed

Said Yousif AlMuhafdha holding a banner of the detained defenders, few nights ago

In another case of escalation of attacks on human rights defenders, Said Yousif AlMuhafdhah, the head of Documentation Unit at the BCHR was attacked yesterday, 15th of August in front of his 3 and 5 year old daughters. This is what happened according to AlMuhafdhah: “I was in the street adjacent to the checkpoint near Zayed City when I was stopped by traffic police in the middle of the highway. They told me that I am wanted by A’ali checkpoint. Then a police car (plate number: 6054) arrived and four of the police officers commenced beating, punching and slapping me in front of my daughters. Another police car (plate number: 5415) arrived and a traffic policeman took my phone by force whilst another was inspecting my car. They found a banner of Nabeel Rajab and asked “who is this?” I responded with his name, and they said “no, say this is ‘our whore’” When I refused they punched me twice, Then a member of the police drove my car with very high speed to a checkpoint and I called my wife to pick up my two little daughters. The police then drove my car to the central police station where they took my testimony and a policeman confiscated two banners from me. They made me sign a pledge without the presence of a lawyer to come to the police station in case I was summoned. My arrest was arbitrary and without a warrant from the public prosecution.” AlMuhafdhah then added: “What hurt me was not the physical assaults I was subjected to, but that the police assaulted me in front of my daughters although they were crying.” This escalation in Bahrain specifically against human rights defenders (check information on imprisonment and torture of Human Rights Defender Abdulhadi Alkhawaja and Human Rights Defender Zainab Alkhawaja) does not appear to come out of nowhere. The escalation of attacks specifically in Nabeel Rajab’s case appears to have taken place after a shift in reactions from the United States administration. Even during the heist of the crackdown in 2011, Rajab was not imprisoned although constantly harassed and targeted. When Nabeel Rajab was attacked and beaten by security forces during a protest in January 2012, there was an instant reaction from State Department and he was immediately released. He then received representatives of the US embassy in Manama in a visit to his home. When Nabeel Rajab was arrested and imprisoned in May 2012, there was no response from the US administration. As the attacks against Nabeel Rajab escalated, the silent reaction from the US administration continued. At the congressional hearing, US assistant secretary of state Michael Posner stated when asked about demanding Nabeel Rajab’s release: “Rajab’s case is complicated”. The BCHR and GCHR do not imply that the United States of America is directly involved in the escalating attacks on human rights defenders, but the lack of pressure from the US administration appears to be linked with the Bahraini government’s willingness to escalate. The BCHR and GCHR call on the US administration as well as other governments that have influence in Bahrain including the UK government, the EU and the leading human rights organizations to: 1. Call for the immediate release of human rights defenders Nabeel Rajab, Abdulhadi Alkhawaja and Zainab Alkhawaja, as well as all other prisoners of conscience. 2. Increase the pressure on the Government of Bahrain to stop the ongoing daily human rights violations as well as escalating attacks on human rights defenders. 3. Immediately stop all arms sales to the Government of Bahrain due to the continuous human rights violations. 4. Initiate a discussion on international consequences towards the Government of Bahrain due to the continuation of human rights violations. 5. Pressure the Government of Bahrain to guarantee in all circumstances that all human rights defenders in Bahrain are able to carry out their legitimate human rights activities without fear of reprisals, and free of all restrictions including judicial harassment.