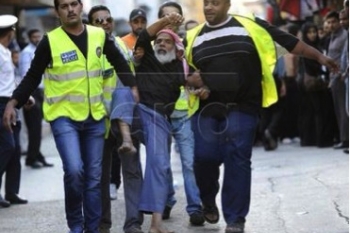 Photo: Haji Majeed’s arbitrary and humiliating arrest during a peaceful protest in Manama

The Bahrain Center for Human Rights expresses grave concern in regards to the security forces’ excessive use of force, arbitrary arrests of peaceful, pro-democracy protestors, and the continuous harassment of pro-democracy and human rights activists. Abdul-Majeed Mohsen, popularly known as "Haji Majeed" is a 63 years-old father of eight, and grandfather of nine. He is a well-known protester in Bahrain who actively participates in many peaceful protests and events, including this video clip called “My Homeland”.

According to his family, Haji Majeed has been arrested 3 times: 1. His first arrest was on the 14th of July 2012 during a protest in the village of Karzakan. He was released without any charge on the 16th of July 2012. 2. The second arrest was on the 17th of December 2012 during a peaceful protest in Manama. He was put in jail for 45 days under investigation, and he was released on the 28th day of his detention, on the 15th of January 2013. According to his family, on this occasion, Haji Majeed was arrested by civilians. He was dragged and taken to an empty place where they turned off their cameras and started to beat him; at one point he was lifted by the neck, which caused him severe pain and an injury that required physiotherapy. 3.

The latest arrest, as explained by his family, was from a checkpoint at the village of Markh during the night of February 14th 2013, which is generally recognized as the anniversary of Bahrain’s pro-democracy movement. He was passing by a checkpoint when some people recognized him and gave him the victory sign. He responded with the same, and when a police officer saw him he was stopped and asked to move to the side. Majeed was told that there is warrant for his arrest him because he is accused of “insulting the King”. He was taken for a 15 days detention, and on the 20th of February 2013, the officers forcefully woke him up in the morning telling him that he has a court session which he had no prior knowledge of. During the court hearing, he discovered that he stands accused on three charges and none of them was the reason he was arrested at the checkpoint. He is accused of:

Police officers claimed that they have a witness who will testify against Haji Majeed but during the court session the witness claimed that he was forced under threats and torture and stated that Haji Majeed is innocent of the charges. In spite of the fact, Haji Majeed was not released awaiting trial on 26th February 2013.

Photo: Haji Majeed being treated after being shot with sound bomb in his leg during a protest.

The Bahrain Center for Human Rights believes that Haji Majeed has been targeted because of the peaceful exercise of his right to freedom of assembly in accordance with the Universal Declaration of Human Rights. The BCHR also calls for Haji Majeed’s immediate release and dropping of all trumped up charges against him and all other detainees who are being held for exercising their right to freedom of assembly.

Read more in the BCHR Anniversary Report: The BCHR Releases Report on Deaths and Detentions to Mark Two Year Anniversary of Protest Movement