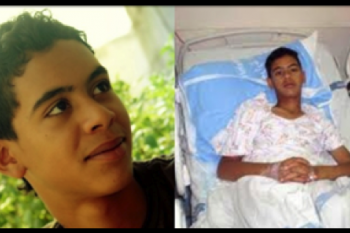 The Bahrain Center for Human Rights expresses its concern for the ongoing violations against detainees jailed in the Dry Dock prison.
Akbar Ali Ahmed Al Kishi - 19 years old and in his final year of high school – was recently kidnapped for more than 24 hours from the Dry Dock prison and he was taken to Hamad Town police Center where he was reportedly tortured and forced to confess to crimes in addition to the existing list of cases pending against him. Relatives of Al Kishi reported to the BCHR that he was taken by security forces in civilian clothing, to an unknown destination after they raided his section of the prison, which includes a large group of political prisoners. His family expressed that his arrest comes in the context of revenge on the people who stood up against injustice, discrimination and violations and did not back down despite the threats and arrests that they have faced.
Al Kishi was wounded in April 2009 "bird shot pellets" after the security forces attacked a protest in the village of Sanabis. Doctors classified his condition as serious, and his recovery from the injuries was gradual. In August 2010, he was arrested during the crackdown launched by the authorities on opponents of the government. He was released after an issuance of amnesty for a group of political prisoners in February 2011. After the imposition of the government’s "state of martial law" in 2011, the family home was raided but Al Kishi was not present at the time, which led to the continuation of the raids his father's house. Al Kishi went into hiding until police managed to arrest him in December 2012 after a raid on his hiding place. He was tortured with beatings, including kicking and the use of batons, and he was forced to confess to the crime of burning an armored vehicle in Bilad Al Qadeem.
Al Kishi trial lasted more than 4 months, and the High Criminal Court ruled on Thursday (4 April 2013) that he would be sentenced to 15 years in prison for burning an armored vehicle, attempted murder of a police officer, possession of 'Molotov cocktails' and burning tires. In April 17, 2013 Ali was taken by surprise when civilians raided his jail cell and took him by security men dressed in civilian clothes. He was taken to the Qudaibiya police station, and then to the police center at the 17th roundabout in Hamad Town. Akbar Ali was presented with new charges, which accuse him of participating in and attacking the police station in Al Khamis area. He has denied the charges but as a result of the torture he was forced to sign papers confessing to these crimes.
According to his family, Akbar Ali was deprived of sitting for an entire day and was suspended in the air for a long period of time, and he thought that his joints might dislocate. He was taken to the Public Prosecution and there he denied the charges against him. The public prosecutor treated him harshly and threatened him by saying: do not sign, but you will not get away with it. On his way back to dry dock prison, security men reportedly continued to beat him, insult him, and one of the officers said to him that they would rape him.
This is not the first time that political prisoners have been kidnapped from prison and taken to centers other than their places of detention where they are interrogated and abused on trumped-up charges. The Public Prosecution collude with the criminal investigations department rather than being an independent which take into account the conditions of the detainees and aspects of the truth in cases considered by it.
Based on the above, the Bahrain Center for Human Rights demands the following:
- The immediate release of Akbar Ali Al Kishi
- Stop targeting activists and fabricating of charges against them
- Create an independent oversight mechanism to enforce the neutrality of the Public Prosecution
- To investigate allegations of torture and bring those responsible for torture to a fair trial