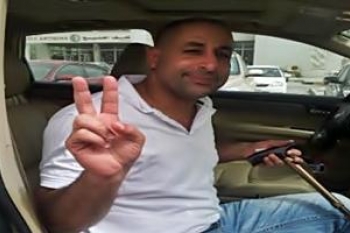 9 May 2013 According to reports received by the Gulf Centre for Human Rights (GCHR) and the Bahrain Centre for Human Rights (BCHR), the public prosecutor charged human rights defender Naji Fateel with alleged "establishment of a group in order to disable the provisions of the Constitution" and ordered his imprisonment for a period of sixty days pending investigation under the internationally criticized terrorism law. Fateel is a Board member of the Bahrain Youth Society for Human Rights (BYSHR). Reports by BYSHR and other groups allege that Fateel has been subjected to severe torture during interrogation in the notorious Criminal Investigations Directorate (CID). Among the allegations are that he has received electrical shocks to his genitals, left foot, and back, and been subjected to simulated drowning, severe beatings, threats to publish photographs of his wife (taken from her camera which was confiscated when security forces raided the family home), verbal abuse using uncivilized words, hanging by his hands from the ceiling, sexual harassment and threats to rape him, standing for long hours, and sleep deprivation. Local sources reported that Fateel was handcuffed and blindfolded in a CID building and the handcuffs and blindfold were removed only after he was transferred to the Dry Dock prison on 5 May 2013. Follow-up reports also confirmed that he has been taken twice to the Interior Ministry Hospital for treatment due to the severe torture he suffered. Naji Fateel was arrested without a warrant by security officers in civilian clothes at his home in the village of Bani-Jamra at dawn on 2 May 2013, and then transferred to an unknown location. The first contact with his family took place on the evening of 4 May 2013 when he told them about his presence at the CID. For more information see our appeal dated on 02 May 2013: (http://gc4hr.org/news/view/405). The GCHR and the BCHR deplore in the strongest terms the targeting and imprisonment of human rights defender Naji Fateel, as well as the torture he has allegedly suffered. The two NGOs believe that the arrest and charges are solely related to his legitimate and peaceful activities in the field of human rights. The GCHR and the BCHR call on the US administration and other governments that have influence in Bahrain including the UK government, the EU and the leading human rights organizations to put pressure on the government of Bahrain in to: 1. Immediately and unconditionally release Naji Fateel and all human rights defenders and activists held in Bahrain as a result of their peaceful and legitimate human rights activities; 2. Carry out an immediate, thorough and impartial investigation into all reports of alleged torture of Naji Fateel with a view to publishing the results and bringing those responsible to justice in line with international standards; 3. Guarantee the physical and psychological integrity and security of Naji Fateel; 4. Guarantee in all circumstances that all human rights defenders in Bahrain are able to carry out their legitimate human rights activities without fear of reprisals, and free of all restrictions including judicial harassment. The GCHR and the BCHR respectfully reminds you that the United Nations Declaration on the Right and Responsibility of Individuals, Groups and Organs of Society to Promote and Protect Universally Recognized Human Rights and Fundamental Freedoms, adopted by consensus by the UN General Assembly on 9 December 1998, recognizes the legitimacy of the activities of human rights defenders, their right to freedom of association and to carry out their activities without fear of reprisals. We would particularly draw your attention to Article 6 (c) “Everyone has the right, individually and in association with others: (c) To study, discuss, form and hold opinions on the observance, both in law and in practice, of all human rights and fundamental freedoms and, through these and other appropriate means, to draw public attention to those matters” and to Article 12.2, which provides that “the State shall take all necessary measures to ensure the protection by the competent authorities of everyone, individually and in association with others, against any violence, threats, retaliation, de facto or de jure adverse discrimination, pressure or any other arbitrary action as a consequence of his or her legitimate exercise of the rights referred to in the present Declaration.”