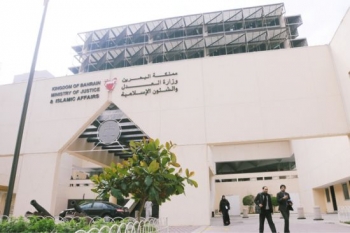 Lawyers Withdraw From the Court in Protest Against Biased Judges

The Bahrain Center for Human Rights expresses grave concern over the continued use of the judicial system for show trials of political prisoners in biased courts that lack the basic requirements for a fair trial.

Ten detained defendants are currently on trial under the internationally criticized terrorism law in the case known as “Al-Emam Army cell”, along with another 12 defendants who are wanted, but not in custody. Seven of the men are accused of “establishing and leading the Jaish Al Imam (Army of Imam) terrorist group with the intention of arming and training its members to carry out acts of terrorism targeting property, the public and police.” They are also accused of “conspiring with Iran to plot terrorist attacks in Bahrain - establishing ties with the Iranian Revolutionary Guard and providing them with information about Bahrain's military, security and vital facilities.” The others are accused of joining, supporting or funding the “terrorist group” and “receiving training to carry out acts of terrorism”.

Eight of the defendants have been in detention since January 2013. Three of them were arrested from Oman and they were submitted to the Bahraini authorities. However, the first session of their trial only started 6 months later on 22 July 2013.

On 15 August 2013, the 4th lower criminal court which has been formed recently to look into the growing number of political cases, refused to hear the testimonies of the defendants. This was the second time since the start of their trial that the court head, Judge Ali Khalifa AlDhahrani refuse to give the defendants any chance to speak in front of the court regarding the violations to their rights during arrest, detention and interrogation.

One of the defendants in the case, Sayed Faisal Al-Alawi, raised his voice to tell the court: “I have the right to speak, as I suffer from three weeks in solitary confinement while handcuffed, I’m deprived from visits and phone calls to my family, there are no human rights in Bahrain.” Another defendant, Ali Sanqoor, also said to the court: “We have the right to speak, this is the second time we are brought here and not allowed to speak, the private photos of my family, my wife and my sisters, were confiscated and since my arrest they have not been yet returned, I can’t allow such violations to the sanctity of my family.”

However, the court didn’t record any of the defendant’s complaints, but the judge asked for the names of those who spoke to be recorded.

At this session, the lawyers requested that the judges be disqualified from hearing the defendants’ trial, on the grounds of bias, and in accordance with the article 211 of the Bahraini criminal procedures law:

In addition, the court has ignored the lawyers’ request to refer the defendants to an impartial medical committee for examination of any injuries they might have suffered while in detention.

Representatives from BCHR have attended the 3rd sessions of the trial on 20 August 2013.

In this session, six out of the nine lawyers withdrew from the case to express objection to the disregard to their request regarding disqualification of the judges from hearing. The lawyers submitted a memo to the court on which they expressed that according to the law, since the lawyers have requested disqualifications of the judges, the case should be suspended until a decision is made by the supreme judicial council.

At time the court did not allow the defendants to speak about violations during detention, the court proceeded with hearing the testimonies of the prosecution witnesses, one of them is accused in several cases of torture, in addition to this case. The first witness, Officer Mohamed Khalid AlSaeedi, said that his “confidential sources” have led him to conclude that the defendants were involved in founding this “terrorist cell”. He added that the defendants have been communicating through viber, skype and email and they were having Iranian and Omani telecom chips.

One of the defendants told the court that the witness, officer Mohamed Khalid AlSaeedi, is the same person who tortured him during interrogation at the Criminal Investigation Department. He stated that he was tortured both physically and mentally, and that the confessions are not genuine.

In the testimony of the second witness, he stated that one of the defendants was transferring monetary amounts from Oman to the company account of another defendant in Bahrain. The defendant replied that he has business relationship with the other defendant, and that these transferred amounts were salaries and rents; he stated that his detention puts forty families at risk of losing their income.

At the end of the session, detainee Sayed Faisal Alawi shouted that he was tortured physically and psychological at the Criminal Investigation Department and that he is still placed in solitary confinement in Asri detention center. He added that he is being subjected to ill-treatment in prison, the guards were cursing the prisoners and the Shiite sect and that one of the officers there, Major Ahmed al-Khalidi, describes Shiite as terrorists.

The next session will be held on 29 Aug 2013, the sessions are being held on weekly basis so far, which indicates that this is meant to be a quick trial.

The defendants have been subjected to many violations to their rights since arrest. Their names and photos were broadcasted via the state media even before the trial began.

One of the defendants in the case is the lawyer Ali AlSamaheeji (35 years old). His wife said that her house was raided at 2:00am on 21 January 2013, and Ali was arrested at this time by masked men. All of the family’s electronic devices, including mobile telephones and laptops, were confiscated. There was no news of Ali for several days. She stated that her husband has been subjected to sever torture following his arrest, including being placed in solitary confinement. He was forced to stand for long hours and was deprived from sleeping and from praying for seven days. The first time that he received a visit by his family several days later, they were able to see torture marks on his body. The defendants were subject to mental torture including threats to arrest and rape their wives and sisters.

Another defendant, Ali Sanqoor, who was arrested on 21 January 2013, was seen blindfolded and handcuffed at the public prosecution on 23 June 2013. Human Rights defender Mohamed AlMasqati who also saw him on that day described his state as “in bad condition”.

All the witnesses in the case are employees of the Ministry of Interior. No substantial evidence was presented to prove the alleged accusations. Among what the public prosecution called evidences are: “encrypted flash memories, money transfers, mobile devices and laptops, cameras, CDs, red horn, first aid kit, some nails, fire extinguisher” in addition to documents about the February 14 revolution including “Lulu Revolution charter” which has been distributed online since February 2012. The public prosecution has not actually provided any evidence that link these defendants with any kind of terrorist activities apart from saving documents on electronic devices.

The case is mainly based on the confessions of these defendants who allege being tortured. The court is refusing to listen to their allegations, let alone investigate.

The defendants who are currently in detention include:

The Bahrain Centre for Human Rights calls on the United States, the United Kingdom, the United Nations and all other close allies and international institutions to put pressure on the Government of Bahrain to:

1. Release all detainees in this case, drop the charges against them, and stop the trials which lack the conditions of a fair trial as the judiciary lacks both impartiality and independence.

2. Conduct a fair and impartial investigation into all allegations of torture raised by these defendants, and bring those responsible to justice and compensate victims.

3. Stop exploiting the judiciary as a tool of repression, and stop using it in favor of the regime and as means for revenge from the opposition who's only crime was demanding freedom and democracy.

4. To annul the terrorism law and to amend the Penal Law in accordance with the international conventions and obligations.