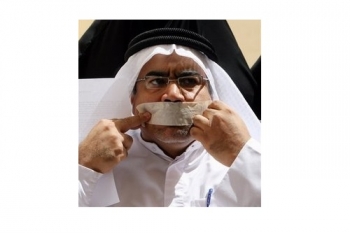 Dr ‘Abdel-Jalil al-Singace, one of the 13 jailed prominent Bahraini opposition activists, has been denied medical treatment. He is a prisoner of conscience.

An academic and spokesperson of the al-Haq Movement, Dr ‘Abdel-Jalil al-Singace, aged 51, is serving a life sentence in Jaw Prison, which is around 30km south of the capital, Manama. Since March 2013 at least nine appointments with the cardiology, ophthalmology and dermatology departments at the Bahrain Defence Military Hospital and 11 appointments at the prison clinic have been postponed because he refuses to wear the prison uniform.

According to his family, Dr ‘Abdel-Jalil al-Singace suffers, amongst other ailments, from sinus inflammation and a perforated eardrum for which he needs surgery.

Between March and mid-July all 13 activists had been denied family visits for refusing to wear the prison uniform, saying it is only worn by criminals and to wear the uniform would be to admit criminality: Every time family members went to the prison they were told they could not visit because the prisoners were “refusing prison instructions”. In mid-July 11 of the 13 started to wear prison uniform, as a result of family pressure, and therefore have been able to receive visitors. Only Dr ‘Abdel-Jalil al-Singace and Hassan Mshaima’ still refuse to wear it.

The High Criminal Court of Appeal in Manama issued its verdict on 4 September 2012, upholding the 13 defendants’ sentences of between five years and life in prison on charges including “setting up terror groups to topple the royal regime and change the constitution”. The Court of Cassation upheld the sentences on 7 January 2013. See Additional Information for a list of all 13 prisoners’ names.

Please write immediately in Arabic, English or your own language:

PLEASE SEND APPEALS BEFORE 21 NOVEMBER 2013 TO:

Office of His Majesty the King

Minister of Justice and Islamic Affairs

Ministry of Justice and Islamic Affairs

Also send copies to diplomatic representatives accredited to your country.

Please check with your section office if sending appeals after the above date. This is the 13th update of UA 139/11. Further information: http://amnesty.org/en/library/info/MDE11/025/2013/en

The al-Haq Movement is an unauthorised Shi’a political opposition group, with its leader, Hassan Mshaima’ and its spokesperson, Dr ‘Abdel-Jalil al-Singace, both serving life sentences in Jaw Prison. Dr ‘Abdel-Jalil al-Singace was previously detained with 22 other leading Shi’a from August 2010 until February 2011 then released by order of the King after the clampdown on the first round of protests.

Two-and-a-half years after the popular uprising in Bahrain, and beneath the fanfare of reform, prisoners of conscience, including some arrested during the protests, remain behind bars and the rights to freedom of expression, association and assembly continue to be suppressed. In recent months, not only have prisoners of conscience not been released, but more people have been jailed simply for daring to express their views, whether via Twitter or on peaceful marches. Bahraini courts have appeared more concerned with toeing the government line than offering effective remedy to Bahrainis and upholding the rule of law.

Fourteen prominent opposition activists were arrested between 17 March and 9 April 2011. Most were arrested in the middle of the night by groups of security officers who raided their houses and took them to an unknown location, where they were held incommunicado for weeks. Many of the 14 have alleged they were tortured during their first few days of detention when they were being interrogated by officers from the National Security Agency (NSA). None of the 14 was allowed to see their lawyers during NSA interrogations just after they were arrested. Some saw their lawyers during questioning by the military prosecutor ahead of the trial, while others were only allowed to see them during the first court hearing in May 2011, which was the first time any of the activists had seen their families since their arrest.

On 28 September 2011, in a session that lasted only a few minutes, the National Safety Court of Appeal, a military appeal court, upheld all the convictions and sentences imposed on the 14 opposition activists. On 30 April 2012, the Court of Cassation in Manama ordered them to appear before a civilian court for an appeal trial; on the same day it reduced Al-Hur Yousef al-Somaikh's two-year sentence to six months. He was immediately released as he had already served his sentence. However, the other 13 remained behind bars in Jaw prison. Their appeal before a civilian court of appeal started on 22 May 2012.