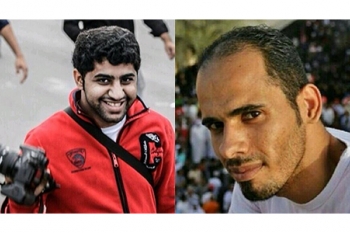 The Bahrain Center for Human Rights is urgently appealing for an intervention in the case of the award-winning photojournalist Hussain Hubail, 21 years-old, who has been denied adequate medical care for approximately two weeks. The authorities in Bahrain are escalating their attack on freedom of expression, by detaining, torturing and ill-treating photographers.

Hubail, who has been held in Dry Docks Prison since August 5th, 2013, has been denied adequate medical care for approximately two weeks. In the early morning on Friday, October 25th, his health deteriorated and he lost consciousness in prison and was transferred to the hospital where he had ECG and was given IV. The security forces failed to proide him with all the medicines that were prescribed by his doctor. He was asked to come back for follow-up visit, but it is unknown whether he will be taken back to the hospital as his doctor requested.

On 31st July 2013, Hussain Hubail, award-winning photojournalist, was arrested from Bahrain International airport while heading to Dubai, UAE. He was subjected to enforced disappearance for over four days, during which his family went to ask about him at the Criminal Investigation Directorate but they denied having him in custody. On 5th August 2013, Hubail was transferred the Dry Dock prison and was allowed his first call to his family. He was not allowed to contact a lawyer until the 7th August, and he was taken to the Public Prosecution on the same day. The BCHR received confirmed information that Hussain was reportedly subjected to torture; he was beaten and kicked in the abdomen and face, kept in an extremely cold room, forced to stand for long periods of time, and deprived of sleep during the time he was at the CID.

According to Hubail's lawyer, Ali Al-Asfoor, he was interrogated about his work as a photojournalist and his connection to twitter account linked to "Tamarrod - Rebellion" protests that were planned on the 14th August 2013. Hubail's house was raided during his interrogation with the Public Prosecution and his camera and laptop were confiscated.

Hubail won 1st place in a photography contest run by Alwasat newspaper in May 2013 for a photograph of protesters amid clouds of tear gas. The BCHR has received information that a photo in which Hussain appeared taking photographs at one of the opposition societies rallies, was shown to detainees in the past months at the CID and the interrogators were trying to learn the identity of the photographer in that photo. (Read More: Bahrain: Arrest of Lawyer after Tweeting about Torture of Detained Blogger and RSF: Use Of Arrest And Torture In Bid To Stifle Protests In Bahrain)

Abdulla Salman Al-Jerdabi is another detained photographer. He was arrested on the 13th September 2013 and was reportedly beaten by security forces on the way to the police station. The beating caused him knee injuries and a wound under his lips; marks on his body from this abuse are still visible. It was reported that when the officer realized that he was a photographer, he threatened him with further abuse. He is accused of illegal gathering and the possession of iron bars with the intention to attack the police force. He will be taken to the Public Prosecution on the 28th of October, and the decision will be taken to release him, or detain him further.

Moreover, photographer Ahmed Humaidan remains in detention pending trial since 29th December 2012, while photographer Hasan Matooq is serving a three years prison sentence since the 24th of March, 2011 for taking photos of injuries during the events of the 2011 protests.

The Bahrain Center for Human Rights calls on the United States, the United Kingdom, the UN, and all other close allies and relevant international institutions to apply real pressure on the Government of Bahrain to: