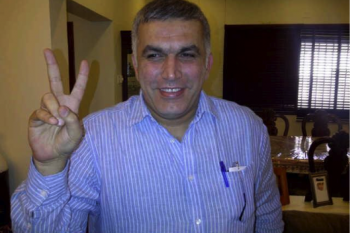 Rajab, a leading human rights defender who is President of BCHR and Secretary-General of GCHR, has been unfairly imprisoned since 9 July 2012 for practicing his legitimate rights to freedom of speech and freedom of assembly – which the government of Bahrain criminalizes and labels as “illegal gatherings.” He had served almost three months in prison for tweeting about Bahrain's prime minister before that conviction was overturned on 23 August 2013. However, he was kept in detention and sentenced to another three years in prison for “participation in illegal gatherings and calling for a march without prior notification.” The sentence was reduced on 11 December 2012 to two years by an appellate court that, in affirming most of Rajab’s underlying convictions, ignored several violations to the defendant's rights, accepted altered videos that were provided by the public prosecution as evidence and ignored requests to allow defense witnesses to enter Bahrain so they could testify in court.

Rajab has been subject to discrimination and ill-treatment in prison, including being placed in solitary confinement with a dead animal, being isolated from other political detainees for his entire detention period and being prevented from contacting his family after he reported violations that he had witnessed in prison.

The five groups reaffirm their belief that Nabeel Rajab has been a victim of judicial harassment by the government of Bahrain, as punishment for his leading role in defending human rights in Bahrain and exposing systematic violations. He should not have been imprisoned at all for merely exercising his rights of freedom of speech and assembly in accordance with the Universal Declaration of Human Rights.

As of 29 November 2013, Rajab will have completed three quarters of his two-year prison sentence, including the period he spent in temporary detention following his earlier arrest on 6 May 2012. As such, Rajab will be eligible for release on that date according to article 349 of the Bahraini Criminal Procedure Code no. 46 of the year 2002, which states:  “Any prisoner sentenced to a penalty depriving him of liberty may be conditionally released if he has spent in prison three-quarters of his sentence and has shown trustworthy behavior while in prison, unless his release would cause a threat to public security.”  Rajab’s lawyer has already submitted an application for conditional release.

In addition to being the President of BCHR and the Secretary-General of GCHR, Rajab is on the MENA Advisory Board of Human Rights Watch and is a Board member and former Vice-President of the International Federation for Human Rights (FIDH). In 2011, he was honoured with the Ion Ratiu Democracy Award for working “tirelessly and at considerable personal peril to advance the cause of democratic freedoms and the civil rights of Bahraini citizens."

BCHR, GCHR, Front Line Defenders, ANHRI and CIHRS strongly call on Bahraini authorities to grant a conditional release to Nabeel Rajab for all the reasons addressed above.