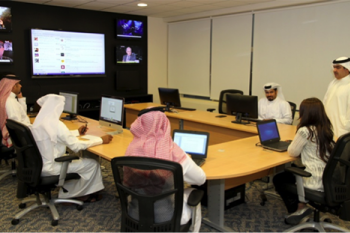 The Bahrain Center for Human Rights expresses concerns over new restrictions to freedom of expression over the internet through the systematic surveillance and censorship of online space.

On 18 November 2013, the Minister of State for Telecommunications Affairs, Fawaz Al Khalifa announced the inauguration of the Cyber Safety Directorate at the Ministry of State for Telecommunications Affairs “to assume its role in monitoring websites and social media networks to ensure they are not used to instigate violence or terrorism and disseminate lies and fallacies that pose a threat to the kingdom's security and stability.” He added the establishment of this directorate comes as part of implementing the 15 recommendations of the National assembly issued last July, which has been widely criticized by local and international NGOs as well as the UN High Commissioner for Human Rights and 47 countries, including the United States, for its apparent restrictions on freedom of expression.

In addition, a hotline number and an e-mail address were published for the general population to report “any websites or accounts inciting violence and acts of terror, jeopardizing peoples’ life and public interests or targeting national unity and civic peace”. It was also announced that the ministry is working on preparing a new law on cybercrimes that incriminates whoever misuses websites, creates accounts for terrorists groups, or spreads their activities and extremist ideas online and disseminates false allegations.

Last September, the Cabinet approved legislation to regulate websites and online content. This legislation provides a platform to criminalize anyone who establishes a website, publishes information online or uses any information technology tools to assist or aid communications with terror cells, as well as promoting the disruption of public order or morale.

The government of Bahrain has a history of restricting internet freedoms, and while the government alleges that they are taking these measures to safeguard national security, in practice the BCHR has observed that the authorities use these powers to arbitrarily interpret and criminalize online speech as well as block websites tied to the political opposition and human rights websites. Between May and June 2013, six twitter users, including a 17 year-old student, have been sentenced to 1 year in prison each for allegedly “insulting the King over twitter”. In total, over 118 months of imprisonment have been delivered to 13 internet users since June 2012 for their online posts. A photographer (Hussain Hubail) and a blogger (Jassim AlNoaimi) both detained since 31 July 2013, are expected to stand trial on 28 Nov 2013 on charges of “misusing social media”.

At the same time, it should be noted that internet users associated with the authorities have been actively sending online threats toward human rights activists and other online users without any action from the authorities, including the famous twitter account @7areghum. The individual running this account is a cyber-vigilante who was reported by the Bahraini Commission of Inquiry in its 2011 report for “defamation and incitement”. However, the account is still active and continues its illegal activity.[1]

Over 1000 websites are blocked in Bahrain, including the Bahrain Center for Human Rights website www.bahrainrights.org/. On 24 November 2013, it was reported that the alternative link to BCHR’s website has been also blocked http://bahrainrights.hopto.org following to the publication of a report which includes serious allegations against high ranked government officials, including members of the Bahraini ruling family. Additionally, a website which does live broadcasts of the religious events of Ashoura from over 30 areas in Bahrain has been recently blocked http://matam.tv as well as another website which broadcast events of political societies – this website was blocked on 23 November 2013, during a broadcast of a conference on the implementation of the recommendations from the Bahrain Independent Commission of Inquiry’s: bhrlive.hopto.org

Last October, Freedom House ranked Bahrain as “Not Free” in its report on “Freedom on the net”.

The Bahrain Center for Human Rights calls on the United States, the United Kingdom, the United Nations and other allies and international institutions to pressure the Bahraini authorities to: