The Observatory: Bahrain: The court's decision not to grant Nabeel Rajab an early release is flawed 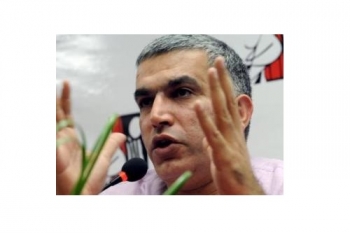 Two days ago, the Bahraini Court of Appeals refused to grant Mr. Nabeel Rajab, President of the Bahrain Centre for Human Rights (BCHR) and Deputy Secretary General of FIDH, an early release which would have been in accordance with the Code of Criminal Procedure. FIDH and OMCT, in the framework of their joint programme, the Observatory for the Protection of Human Rights Defenders, deem this decision as arbitrary.

On December 2, 2013, the Court of Appeals scheduled an urgent session to examine the request filed by Mr. Nabeel Rajab's lawyers for an early release of their client and decided not to grant such release without providing any grounds. According to the information received, the Court also failed to investigate duly on whether conditions for early release had been met. A representative from the US Embassy was preventing from observing this court hearing. Previously, on November 24, a penalty enforcement judge had issued the same decision. During the session, Mr. Rajab's lawyers presented their arguments that Mr. Nabeel Rajab was eligible for early release in pursuance to the conditions laid under Article 349 of the Criminal Procedural Code, which sets three conditions: that ¾ of the sentence has been served, good behaviour during detention and not being a threat to public security. The proceedings failed to comply with the right to a fair trial as the court failed to properly examine the request for early release; failed to provide grounds for its decision and did not guarantee the public nature of the hearing. Lawyers were told that the decision was final and could not be appealed. By this, all local remedies have been exhausted.

“This decision confirms that the Bahraini judiciary not only does not care about conforming to international human rights standards but also about implementing domestic law in full independence”, said Karim Lahidji, President of the International Federation for Human Rights (FIDH).

This court's decision blatantly contradicts the Opinion recently published by the United Nations (UN) Working Group on Arbitrary Detention (WGAD) session that the detention of Nabeel Rajab is arbitrary and that the Bahraini authorities should release him immediately. The UN WGAD argued that the “denial of a universally accepted human right to freedom of opinion and expression cannot be condoned by a domestic court, as seen in the case of Mr. Rajab”.

“The ongoing detention of Nabeel Rajab blatantly violates the International Covenant on Civil and Political Rights (ICCPR) ratified by Bahrain as well as basic internationally recognised human rights such as the right to fair trial. It is time for the Bahraini authorities to face up to their international obligations and abide by the WGAD decision and release at last Mr. Rajab”, said Gerald Staberock, Secretary General of the World Organisation Against Torture (OMCT).

The Observatory recalls that the Bahraini authorities detained and convicted Mr. Rajab under existing domestic laws in violation of the basic right to freedom of opinion, expression and assembly. He was prosecuted for exercising his universally recognised human rights. The entire procedure was fraught with serious human rights violations from the time of arrest, through detention, trial and conviction.

The Observatory deeply regrets the court's refusal to grant Mr. Rajab an early release, and deplores the judge's decision that did not provide any grounds. It considers the decision an attempt to curtail Mr. Rajab's activities as a human rights defender and calls on the Bahraini authorities to adhere to its international human rights obligations and apply them to the case of Mr. Nabeel Rajab.