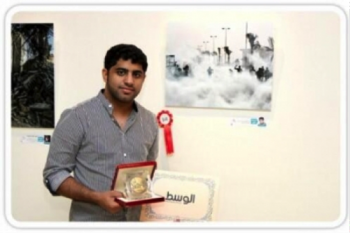 Despite the Authories’ claim of respecting freedom of expression, Hubail and Al-Noaimi before court on the charge of ‘inciting hatred against the regime through social media’

The Bahrain Center for Human Rights expresses its concern for the Bahrain Authorities continuous incrimination of freedom of expression on the Internet, and neglecting the deteriorating health condition of the detained photographer Hussein Hubail, and continuing to detain him amid his family’s fear and worry. The BCHR received definite information regarding the Dry Dock prison administration’s neglect of Hubail’s health requirements which puts his life at risk.

Information indicates that Hubail experienced a high rise in blood pressure on Wednesday 13 November 2013; his blood pressure reached 200. However, the prison administration merely gave him an IV injection in the clinic without taking him to a specialized doctor. Information states that the detainee was not taken to his cardiology clinic appointments since he was cut off from visiting his doctor on 19 October 2013, and neither did they bring his heart medication, although the Special Investigation Unit confirmed that they were missing when they visited him on 6 November 2013.

The photographer Hubail and internet user Jassim Radhi Al-Noaimi (detained since 31 July 2013), are currently being tried on charges of “inciting hatred against the regime through social media, and calling for illegal protests” which refutes the authorities’ claim of respecting freedom of opinion and expression. At the first hearing of their trial, which was held on 28 November 2013, both individuals denied the charges against them. Hussain Hubail told the court that he is not receiving adequate medical care for his heart illness, not being taken to the hospital until his condition worsens to the point of his collapse, and he is not provided with the medication until after his symptoms begin to include sever pain and suffering. He also added in his testimony to the court that he has been subjected to torture and he called for the authorities to provide him with the necessary medical care.

The lawyers for Hubail and Al-Noaimi requested that the defendants be release on bail during the trial. However, the court didn’t respond to their request. Both detainees are being held at the Dry Dock detention center[1]. Their next hearing will be on 22 December 2013.

The Authority in Bahrain is neglecting the deteriorating health condition of Hubail despite the multiple appeals by his family[i], his lawyer, and local and international human rights organizations[ii]. Hubail – the international award winning photographer – had been arrested on 31 July 2013 from Bahrain’s International airport on his way to Dubai, UAE. He was subjected to enforced disappearance for four days. During that time his family went to ask about him at the Criminal Investigation Department, yet they denied he was in detention. On 5 August 2013, Hubail was transferred to the Dry Dock prison, and he was allowed to contact his family for the first time. However, he was only allowed to contact his lawyer on 7 August 2013 and was brought to court on the same day. The BCHR received confirmed information[iii] that Hussein was subjected to torture, beating and kicking in the stomach and face, and was kept in an extremely cold room, and was forced to stand up for long periods of time, as well as being deprived from sleep throughout the entire time of his stay at the Criminal Investigation Department.

Noteworthy, 6 social media network users have received one year imprisonment sentences in May and June 2013 on the charge of ‘insulting the King on Twitter’. Overall, 118 months is the total period of sentences given since June 2012 for 13 Internet users on charges related to freedom of expression on social media networks[iv]. Freedom House had ranked Bahrain as ‘not free’ in relation to freedom of Internet in its report that was released in October 2013[v].

The continuous assaults against journalists and electronic space users, and the use of the judicial system to limit freedom of expression is a direct violation of the Universal Declaration of Human Rights, Article 19: ‘Everyone has the right to freedom of opinion and expression; this right includes freedom to hold opinions without interference and to seek, receive and impart information and ideas through any media and regardless of frontiers’.

Based on the above, the BCHR calls upon the United States, the United Kingdom and the United Nations and all other close allies and related international associations to exert actual pressure on the government of Bahrain in order to: