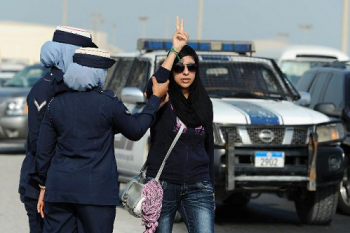 The GCHR and BCHR have received information about the deteriorating health conditions of Al-Khawaja, who is serving a year in Isa Town women's prison since her detention in February this year. During a family visit on 9 December 2013, her family reports that she looked pale and tired. During the first week of December she said she was feeling dizzy and weak. She had difficulty standing and was unable to read. She asked the prison administration to see a doctor but her request was not granted until after two days.

While she was ill, she was treated poorly. She was handcuffed and taken by car to the prison clinic at the headquarters of the Ministry of Interior, where she was videotaped by a cameraman throughout the whole period until she was returned to prison, including during her examination and treatment. In addition to two policewomen accompanying her, there were two policemen sitting beside the bed in the treatment room and a camera on a stand was focused on the bed. The doctor prescribed IV with an injection and some pills but did not tell Al-Khawaja what they were. Given the presence of men in the treatment room, Al-Khawaja wouldn’t agree to lie on the bed and instead she received the IV while sitting on a chair. The five people and the two cameras were focused on her throughout this time. She was later taken back to prison in handcuffs again.

Compared to the procedure used when transferring inmates to receive medical care, Al-Khawaja has been exceptionally ill-treated with provocative, disrespectful and unnecessary measures, particularly the videotaping and the presence of men and cameras in the treatment room, violating her right to privacy at the time of treatment, and in violation of the article 53.3 of Standard Minimum Rules for the Treatment of Prisoners in Bahrain which states: “Women prisoners shall be attended and supervised only by women officers.”

What adds to the concern of the GCHR and BCHR are the earlier reports that Al-Khawaja has been incarcerated with prisoners who have Hepatitis A and B despite informing the prison administration that she has not been vaccinated. The prison administration continues to ignore her complaints, which puts her at great risk of infection.

Background:
Human rights defender Zainab Al-Khawaja has been detained since 27 February 2013. She is currently serving a total of 12 months on multiple charges and due to remain in prison until February 2014. On 25 November 2013, her lawyer said that a new case had been brought against her and a new trial will commence on 22 December 2013 on charges of “insulting a police officer” in relation to Al-Khawaja's defense of another prisoner against a prison’s guard insults and humiliation. (More details at http://www.bahrainrights.org/en/node/6625.)

The GCHR and BCHR believe that the harassment of human rights defender Zainab Al-Khawaja and the new threats of extended imprisonment is a result of the absence of strong international pressure to stop the ongoing attacks and targeting of human rights defenders in Bahrain which have left them shattered between prisons and exile.

The GCHR and BCHR urge the international community and in particular the States that are close allies of the Government of Bahrain, to call upon the Bahraini authorities to: