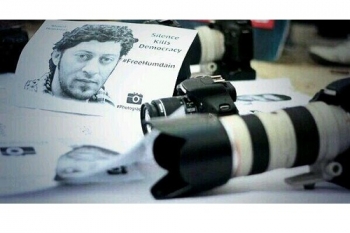 The Bahrain Center for Human Rights expresses its deep concern for the Bahraini authorities’ continued practice of arbitrary arrests and excessive use of force against journalists, photographers, and human rights activists. On Wednesday, 26 March 2014, the Third High Court issued a 10-year prison sentence against photographer Ahmed Humaidan [1] in a trial that lacked due process.

A reputed freelance photographer, Humaidan has won 163 awards internationally for his contributions to the field. After his arrest for alleged arson in December 2012, he stated that he suffered a nervous breakdown as a result of the torture he was reportedly subjected to by the Criminal Investigation Department (CID) [2]. Humaidan was reportedly subjected to various methods of torture, including being forced to stand in a cold room for hours whilst handcuffed and blindfolded. Humaidan informed his family that while he was blindfolded and handcuffed at the CID, he was reportedly forced to carry an object that his interrogators told him was a live bomb. He was made to hold the object for several hours under duress and strict surveillance. Additionally, Humaidan stated that he was psychologically intimidated during questioning in order to extract a false confession. Interrogators reportedly threatened to bring charges against his siblings on fabricated crimes if he refused to confess.

Fadhel Al-Sawad, Humaidan’s lawyer, stated that no incriminating evidence was presented in court against Humaidan, except for the confessions that were reportedly extracted under torture and reports from anonymous sources from within the CID. Humaidan was subjected to an unjustified delay in his trial that continued for more than a year because key witnesses from the Ministry of Interior evaded and declined to attend the court proceedings for six months. There were numerous inconsistencies in witness testimony throughout the trial, particularly in regards to the location of the alleged crime [3]. Three testimonies from the prosecution witnesses stated that the alleged act of arson occurred in different locations - one stated that the fire was located outside of the building in question, in a front yard, while another stated that it occurred inside the building, in a tower. A third witness for the prosecution stated that the arson was not in relation to a building at all, but that it was his leg that was set on fire. Although Al-Sawad submitted substantial evidence in support of Humaidan’s innocence during the yearlong trial, the court delivered the maximum sentence against Humaidan, whilst simultaneously acquitting two fugitive defendants that lacked defense and proof of innocence [4]. The Bahrain Center for Human Rights considers the decisions of this court to be arbitrary, and politically motivated.

The BCHR has documented attacks on photographers and journalists since the beginning of the pro-democracy movement in 2011. More than ten members of the media have been sentenced to prison [5]; some of them were reportedly subjected to torture. The blogger Zakariya Al-Ashairi [6] was documented in the BICI report as having been tortured to death. Others have faced extrajudicial killings, including photographer Ahmed Ismail Hasan [7]. During the three-month state of emergency in 2011, several photographers and members of the media were documented to have been summarily dismissed from their jobs and arrested during house raids; their families were reportedly intimidated, and some of their personal photography equipment was reportedly stolen. The government has failed to independently investigate these incidents, and has failed to hold the perpetrators of these acts accountable. On the contrary, in a recent case, the police officer Sara Al-Moussa [8] was acquitted of all charges in which she reportedly tortured the journalist Nazeeha Saeed (see: http://www.bahrainrights.org/en/node/6260).

The authorities in Bahrain continue similar practices today. Many members of the media, including photographers such as Ahmed Fardan and Jaffar Madhoon, are subjected to enforced disappearance and reportedly tortured in order to extract false confessions [9]. Others, such as photographer Hussein Hubail and blogger Jassim Al-Noaimi, are reportedly subjected to torture, and then denied access to adequate medical attention [10]. The Bahraini authorities also target specific members of the press, such as journalist Mazen Mahdi and photographer Mohammed Al-Sheikh. On 26 February 2014, Mahdi was shot directly in the leg with a tear gas canister while filming a protest. The angle at which the shot was fired and the deliberate aiming of teargas directly at photojournalists confirms that the targeting was specific and intentional [11].

International human rights institutions and organizations have condemned the practice of targeting photographers and members of the media and subjecting them to enforced disappearance and torture. Reporters Without Borders has condemned the government’s practice of using arbitrary arrests as a means of intimidation to restrict the flow of information out of Bahrain [12].

Based on the above, the Bahrain Center for Human Rights calls on the United States, the United Kingdom, United Nations and all close allies to the government of Bahrain to pressure Bahraini authorities to: