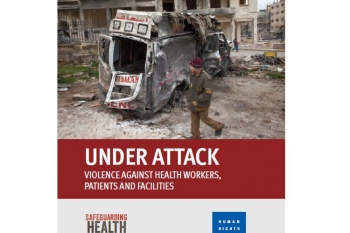 (Geneva) – Hundreds of attacks on health workers have occurred in dozens of countries around the world since 2012, Human Rights Watch and the Safeguarding Health in Conflict Coalition said in a joint report released today. The report, released in advance of a meeting on May 19 to 24, 2014, of health ministers from around the world, called on governments to do more to protect patients, health workers and facilities from attack in countries undergoing conflict and civil unrest.

The 28-page report, “Under Attack: Violence against health workers, patients and facilities,” highlights recent attacks in countries around the world. Examples include the targeted killing of more than 70 polio vaccination workers in Pakistan and Nigeria; the arrests of health workers for providing care to protesters in Bahrain and Turkey; and the bombing of hospitals and deaths of hundreds of patients and health workers in Syria.

“When health workers and hospitals are attacked, people can’t get medical care and trained professionals flee areas where they are urgently needed,” said Leonard Rubenstein, chairman of the coalition, which includes more than two dozen human rights, health and health professional, and other nongovernmental groups.

Other examples the groups cited include attacks targeting health workers in South Sudan and Afghanistan, severely reducing access to health care for civilian populations. In South Sudan, opposition forces shot hospital patients and looted and burned clinics and hospitals during 2014 in Benitu, in Unity State, Malakal, in Upper Nile State, and Bor, in Jonglei state. Government forces attacked and burned down hospitals in Unity and Jonglei states. The deliberate targeting of hospitals, medical personnel or patients in an armed conflict is a war crime.

In Afghanistan, dozens of violent attacks including killings, assaults and abductions were reported against health workers and facilities in 2013. In April 2014, an American physician was killed by a policeman at Cure Hospital in Kabul, and recent attacks have targeted an ambulance in the middle of a medical evacuation in Laghman Province and a vaccination worker in Awar Province. Medical care for women in Afghanistan has been especially affected, resulting from a shortage of qualified female health workers.

Action to address the crisis is beginning, the groups said. The report cited the October 2013 report of the United Nation’s special rapporteur on the right to health bringing attention to this issue, and efforts by the World Health Organization to develop methods for measuring the type and frequency of attacks.

In addition, the UN Security Council has expanded the mandate of the secretary-general’s special representative on children in armed conflict to include reporting of and accountability for attacks on medical facilities and personnel. The International Committee of the Red Cross and Médecins Sans Frontières have campaigns highlighting attacks on health workers and facilities.

However, much more needs to be done, starting with increased monitoring of attacks, the groups said. Countries should enact legal protections for health workers, repeal laws criminalizing the work of doctors and nurses providing health care to people who oppose government policies, and provide greater accountability for those responsible for attacks.

In February and March 2011, hundreds of Bahraini protestors were injured, detained, and tortured by state authorities.

Doctors who sought to provide care to the wounded protesters were targeted and arrested by the authorities. Heavily armed security forces were sent into hospitals where they beat, tortured, and interrogated already wounded protesters and the personnel treating them. Tanks were positioned in front of hospitals and doctors were arrested and abducted from their homes. Forty-eight health workers were detained; some reported being tortured, and many were convicted on charges that included incitement to overthrow the government and supplying protestors with weapons. As of January 2014 two nurses and one doctor remain imprisoned and the government has prevented many doctors and nurses – typically Shia Muslim – from working in government hospitals.

Rula Al-Saffar
President of the Bahrain Nursing Society:
“The deliberate and systematic attacks on health workers and facilities by Bahraini security forces not only harmed medical professionals, but the people of Bahrain. Governments should respect the proper functions of health systems so that we can provide care for all those in need, no mattertheir political affiliation.”