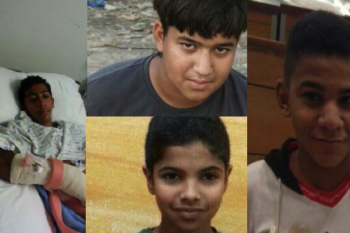 Update 24 July 2014: Two children mentioned in the statement below, Mohamed Mansoor Abdulhussain and Jehad Al-Sameea, have recently received verdicts from the juvenile court. Fourteen year-old Mohamed Mansoor Abdulhussain, who has been held in detention since 9 April 2014, was sentenced to six months in juvenile detention on 17 July 2014. Jehad Al-Sameea, 11 years old, was sentenced on 7 July 2014 to an indefinite peroid in juvenile dentention, extending his total time in detention based on his behaviour.

7 July 2014: Bahrain Center for Human Rights expresses grave concern about the Bahraini authorities’ ongoing targeting of minors less than 15 years of age as part of its ongoing crackdown on the pro-democracy movement in Bahrain. The BCHR continues to document cases of arrest, detention, and physical assault on children below 15 years old by the security forces.

On 29 June 2014, the juvenile judge ordered for the detention of Hussain Mohamed Khalaf, 13 years old, for five days pending an investigation on charges of illegal gathering and rioting following his arrest on 26 June 2014. There were no protests in the area at time of his arrest. Khalaf’s family reported that he was beaten at Qudaibiya Police Station and was forced to confess to acts that he did not commit. His family has expressed fears for his health as he has meningitis, which has affected his head, and has previously undergone surgery in his back.

On 30 June 2014, the juvenile judge extended the detention of Mohamed Mansoor Abdulhussain, 14 years old, for seven days pending investigation on charges of illegal gathering and rioting. Abdulhussain has been in juvenile detention since 9 April 2014, and had his detention extended on a weekly basis since then despite the lack of a court conviction. He has spent the school examination period in detention, which has had a severe impact on his educational progress.

On 1 July 2014, 11 year-old Jehad Nabeel Al-Sameea had his detention extended again for eight days by the juvenile judge. Al-Sameea has been in detention since 22 May 2014 on charges of “physical assault of a policeman, damage to two police cars, illegal gathering, rioting, and possession of Molotov cocktails,” which are unreasonable given his small size and limited physical power. He is a fifth grade student and he has spent the school examination period in detention. Al-Sameea was banned from seeing his mother for 21 days after detention. He is not allowed to have phone calls with his family, and is only granted one visit a week. During a visit in mid June, Al-Sameea appeared pale, weak, and infected with ulcers. He told his mother that he did not like the prison food, but he is not allowed to receive food from outside.

On 12 June 2014, Al-Sameea had a hearing on a different case against him, in which he was charged with rioting, and the judge placed him under “judicial probation” for two years. During this period, a social supervisor will check on him every six months to report on his behavior.

In a different case, Ebrahim Ahmed Algaydom, 14 years old, was arrested from Sehla on 26 June 2014, and had his left arm broken due to the polices’ use of excessive force. He was transferred to the military hospital for treatment and was released on 29 June 2014.

It is important to note that while these children, and many more like them, are forced to spend months in detention without being convicted, security officers on trial for torture and extra-judicial killings are allowed to be out of detention and resume work duty while on trial. There has been no confirmed information that those convicted for torture and extra-judicial killings have spent any time in prison. No convicted security officers have been placed under “judicial probation” for any amount of time.

Minors below the age of 15 are not criminally responsible in the eyes of Bahraini law; however, the authorities often arrest them from protests and detain them for several weeks at a time. The BCHR has documented more than 70 cases of arrests of children since January 2014. While some of the children have been released, many more remain in detention.

The detention and ill-treatment of a child without an immediate and just cause, in the absence of a conviction of a crime, against his mental and physical well-being and interest as a student violates several articles of the Convention on the Rights of the Child. Article 3 that "In all actions concerning children, whether undertaken by public or private social welfare institutions, courts of law, administrative authorities or legislative bodies, the best interests of the child shall be a primary consideration."  Article 37 continues, stating that "States Parties shall ensure that: (b) No child shall be deprived of his or her liberty unlawfully or arbitrarily. The arrest, detention or imprisonment of a child shall be in conformity with the law and shall be used only as a measure of last resort and for the shortest appropriate period of time."

The BCHR calls on the United States, the United Kingdom, the United Nations, the European Union and all close allies and international institutions to put pressure on Bahraini authorities to: