Bahrain: Escalation in Hate Speech and Incitement to Violence by the Former Intelligence Colonel Adel Flaifel Under the Policy of Impunity 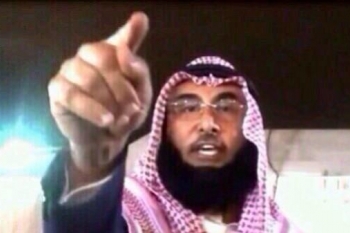 The Bahrain Center for Human Rights expresses its concern for the continuing policy of impunity pursued by the authorities towards the violations committed by its loyalists, in addition to the direct and indirect support for fuelling sectarianism and allowing hate speech.

In a speech delivered by the former Colonel Adel Flaifel in a house gathering in Muharraq on 11 July 2014, he described the Shiite sect leader in Bahrain, Sheikh Isa Qassim, as an “infidel” and the Islamic Council that Oassim seeks to establish that would involve both the Sunni and Shiite sects as an “infidel” council. Flaifel also insulted Qassim’s companions, stating that they were saint worshippers and that they must repent. He also publicly threatened Qassim that he will “catch him like a rat and sully his nose in the dirt as had happened to his companions in Iraq and Syria,”[1] a reference to the current violence occurring in the two countries. In a statement released by Shiite religious scholars, they stated that because the leader of the sect is such a symbolic figure, characterizing him as an infidel extends to include the entire Shiite sect in Bahrain, a majority of the population.[2]

Despite the wide circulation of the video on social media, and the growing controversy among the public, the Bahraini Authorities have not taken substantial action to address the blatant usage of hate speech or the explicit threat to the security and safety of Sheikh Isa Qassim. The Public Prosecutor announced on 23 July 2014 that an individual had been interrogated for "publishing and broadcasting video recording on the Internet on which he attacked a denomination and despised its rituals," and that he was charged with "publicly infringing on one of the recognized denominations and contempt of its rituals.”[3] However, the Prosecution did not charge him for the threats and insults to Qasim, citing that "this crime requires a complaint from the victim, or his legal representative in order to move a criminal case." The Public Prosecution did not say if the accused had been arrested.

This is not the first time where Flaifel has issued a direct threat towards a public figure or activist. In December 2011, he has directed clear and explicit threats in towards human rights defenders Nabeel Rajab, Mohammed Al-Maskati and Sayed Yousif Al-Muhafdah as well as journalist Lamees Dhaif on his personal Twitter account.[4] He repeated those threats in November 2013 when he threatened Sayed Yousif Al-Muhafdah, Vice-President of the BCHR, to make him “minced meat” and said, “killing you is an obligation.”[5] In October 2013, Flaifel directed his threats to U.S. Ambassador Thomas Krajeski, vowing that "the application of religious duty" on him if he continued “hurting Muslims”[6], a reference to the U.S. administration’s efforts to drive the reform process in the country.

Flaifel rose to fame between 1980 and 2000, as an intelligence officer working in the now-dissolved State Security Apparatus and as an assistant to the well-known Scottish officer Ian Henderson, the head of the State Security Apparatus. He was notorious for assaulting his detainees and mutilating them during the detention period, and he is considered one of those directly responsible for the death of dozens of citizens due to torture, and for the torture of thousands of victims who he either tortured himself or ordered and supervised the torture of. Flaifel is also responsible for the many physical and sexual assaults committed against the detainees in his custody.

Flaifel was also involved with forcing dozens of Bahraini families of Persian origin onto primitive ships that lacked minimum safety measures, and forcibly sending them to Iran without passports or official documentations in circumstances that lack the lowest human standards. If not for the Iranian Coastguard, several families would have been lost and/or drowned. The Bahraini families were treated as refugees in Iran, and suffered from difficult living conditions until the majority were allowed to return to Bahrain in 2000. Flaifel was also behind the movement that saw the finest Bahraini students lose their opportunity to education and the widespread loss of jobs. Many of his victims became underprivileged and poor or displaced and scattered around the world.

During his time at the State Security Apparatus, Flaifel used his power and authority to extort money from hundreds of detainees’ families for their release. In addition to money, he also seized large tracts of land owned by Bahraini businessmen, or forced them to sell it to him at a very low cost. Many complied with his demands out of fear of his tyranny, and because anyone who refused to obey his orders was thrown in jail, accused of political charges and attempting to overthrow the regime or criminal charges and fabricated drug cases. As a result of his blackmail process, Flaifel was able to amass a large fortune estimated to be hundreds of millions of dollars. He was able to successfully carry out his crimes by making use of his extensive connections in the intelligence sector, public and private state institutions, and his personal relationships. Flaifel maintained a close personal friendship and financial partnership with the King’s cousin and current adviser Sheikh Khalid bin Mohammed bin Salman Al-Khalifa, and who was the head the State Security Apparatus at that time: Khalid Al-Khalifa’s involvement provided the cover for the crimes of fraud and extortion that he practiced. Flaifel was also infamous for his boisterous red-light night parties, either in the bars or discos that he owned and operated, or at his farms, palaces, and private yachts.

When the current King Hamad bin Isa Al-Khalifa ascended to throne on 6 March 1999, he made several promises at the beginning of his reign regarding reform, accountability, and eradicating corruption. These promises scared many of those involved in the widespread corruption and human rights violations, and prompted Colonel Adel Flaifel to flee to Brisbane, Australia, where he promised people there a prosperous economic era as a result of his financial investments. The Bahraini Ministry of Interior had announced at that time that it requested the International Police (Interpol) to return him. His property investments in Brisbane were estimated to be worth hundreds of millions of dollars. The BCHR worked alongside several Australian human rights organizations and international organizations to expel Flaifel from Australia due to his criminal record and wide violations committed by him against human rights in Bahrain. As a result, Australian authorities refused to grant him residence.[7] Dozens of demonstrations and protests took place across Bahrain, where tens of thousands of his victims or their families participated, demanding that he be brought to justice. International organizations, including Human Rights Watch and Amnesty International, wrote about him and demanded the government of Bahrain to bring him to trial for the crimes he committed.[8]

As a result of his threats to the authorities that he would disclose sensitive information that would implicate several Bahraini officials if he were to be prosecuted, Flaifel received assurances and promises from the government that the authorities would not target him if he returned to Bahrain, and that he would be granted a special pardon by the King. In October 2002, the King issued Decree-Law No. 56 and which by it prohibits prosecuting the perpetrators of crimes of torture in violations that occurred prior to the issuance of the decree. Flaifel returned to Bahrain on Saturday, 23 November 2002, to resume his commercial business once again.[9]

Following the bloody security campaign against the public protests in 2011, the media appearances of retired Colonel Flaifel increased and assumed a Salafi tone. He began to infuse his speeches with an extreme religious sectarian, and continued to direct public threats and incitement against pro-democracy opponents during speeches at public meetings, his personal Twitter account, and during television appearances.[10] In his speeches, he called for the establishment of armed civilian militias on a sectarian basis[11] and incited the killing of civilians who called for reform and democracy and also human rights activists, whom he named as terrorists.[12]

Despite public statements about charging Flaifel in April 2014 with contacting terrorist organizations in Libya, Tunisia, and Yemen, where he said, “the apparatuses informed him that there is voice evidence against him of calling those organizations,” no legal action was taken. Flaifel also claimed that the security apparatuses accepted a payment of 7.5 million Dinars in return for not imprisoning him.[13]

Adel Flaifel is a clear example that the authorities condone the blatant usae of hate speech and inciting of violence. Several pro-government mosque preachers continue to publicly attack with the Shiite sect with insults, slander, and accusations of treason, Friday’s sermon by Sheikh Jassim Al-Saeedi as an example[14], without facing repercussions from the Ministry of Justice. In March 2012, Sheikh Jassim Al-Saeedi, a Bahraini MP, delivered a speech during the Friday prayers wherein he described the Shiite sect as “illegitimate children,” an extremely abusive and derogatory term. Despite this, the Ministry released a statement claiming to request initiating an investigation in the incident, but no further action was taken.[15]

In July 2012, human rights defender Nabeel Rajab, president of the BCHR, was charged with insulting the people of Muharraq City and was sentenced to three months imprisonment due to complaints filed by Adel Flaifel and a group of officers in court. He was served half the sentence before he was eventually acquitted and imprisoned on other charges. In a clear example of the discrepancies in the justice system, Flaifel himself delivers hate speech in which he accuses a large portion of the population of blasphemy, curses them, and threatens their religious figures without facing any consequences. In a comment, Rajab said, “What Flaifel said is considered a crime; however the judicial and security institutes fall silent in response to the householder the Prime Minister who said that the law does not apply to everyone. If we assumed that the security and judicial bodies decide to take action, I’m sure that it’ll be superficial action void of any content, and there are many experiences of that.”

Based on the above, the Bahrain Center for Human Rights calls on the United States, the United Kingdom, the United Nations, the European Union and all close allies and international institutions to put pressure on Bahraini authorities to:

Link to the article in Arabic: http://bahrainrights.org/ar/node/6979