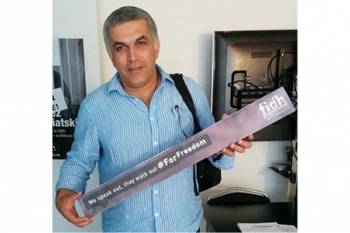 Americans for Democracy and Human Rights in Bahrain (ADHRB), the Bahrain Center for Human Rights (BCHR), and the Bahrain Institute for Rights and Democracy (BIRD) express grave concern over the arrest and detention of the leading Human Rights defender Nabeel Rajab as part of ongoing campaign against human rights in the country and call for his immediate and unconditional release.

On 1 Oct 2014, the human rights defender Nabeel Rajab, President of the Bahrain Center for Human Rights and Director of the Gulf Center for Human Rights, was urgently summoned by the electronic crimes unit for interrogation at the Criminal Investigation Department. He went to the criminal investigation department accompanied by his lawyer where he was interrogated on charges of “insulting a public institution” over twitter and was subsequently placed under arrest and detained pending an appearance at Public Prosecution tomorrow, 02 October 2014.

The summon and arrest come less than 24 hours after the arrival of Rajab to Bahrain from an advocacy trip where he has spent over two months traveling throughout Europe to advocate for human rights in Bahrain; he also attended the UN Human Rights Council 27th Sessions advocating for human rights in Bahrain and campaigned for greater support to the Bahraini people’s struggle for rights and democracy.

Rajab was imprisoned in Bahrain for two years between July 2012 and May 2014 for exercising his right to freedom of assembly by participating in and calling for peaceful protests, in the capital city of Manama, in defense of people’s rights in Bahrain. Before that he was prosecuted for his tweets multiple times, including one case in which he was sentenced to three months for allegedly defaming a citizen of the Bahraini village Muharraq , although the court of appeal acquitted him after serving most of that sentence. It should be noted that Rajab has over 239,000 followers on twitter (@NabeelRajab) and his voice online is one of the most prominent in Bahrain, and across the Middle East. Following his release, Rajab continued to receive threats of repeated arrested, but he was determined to continue with his peaceful human rights work.

The undersigned groups believe that the leading human rights defender Nabeel Rajab has been targeted with repeated arrest and detention because of his work in the field of human rights, and that the government’s aim is to hinder his advocacy work both inside and outside of Bahrain.

The undersigned groups call on the United States, the United Kingdom, the United Nations and all other allies and relevant international institutions to put pressure on the government of Bahrain to:

The undersigned groups note that the United Nations Declaration on the Right and Responsibility of Individuals, Groups and Organs of Society to Promote and Protect Universally Recognized Human Rights and Fundamental Freedoms, adopted by consensus by the UN General Assembly on 9 December 1998, recognizes the legitimacy of the activities of human rights defenders, their right to freedom of association and to carry out their activities without fear of reprisals. Of particular relevance to this case is Article 6 (c) which states that: “Everyone has the right, individually and in association with others: (c) To study, discuss, form and hold opinions on the observance, both in law and in practice, of all human rights and fundamental freedoms and, through these and other appropriate means, to draw public attention to those matters” and to Article 12.2, which provides that “the State shall take all necessary measures to ensure the protection by the competent authorities of everyone, individually and in association with others, against any violence, threats, retaliation, de facto or de jure adverse discrimination, pressure or any other arbitrary action as a consequence of his or her legitimate exercise of the rights referred to in the present Declaration”.

Americans for Democracy and Human Rights in Bahrain (ADHRB)

The Bahrain Institute for Rights and Democracy (BIRD)