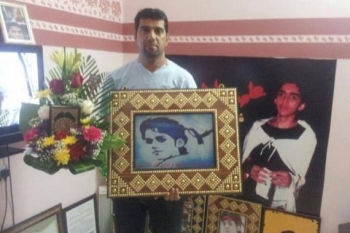 25 November 2014 – On 19 November 2014, Yousif Badah attended a memorial event dedicated to his 16-year-old son, Ali Yousif Badah, who was killed during the Bahrain Uprising in 2011. According to his father, who discussed his son’s death in a recent interview with VICE (22’50), Ali Badah was crushed to death when a police jeep pinned him repeatedly against a wall.

On the third anniversary of his death, Yousif Badah joined a public gathering to commemorate his son’s death and to call for accountability for his killing. That evening, government security forces attacked the peaceful protest without warning. Video footage shows security forces charging at protesters with their vehicles and firing shotguns and tear gas canisters at the crowd.

As Yousif Badah attempted to flee from the attack, he was struck in the face by a tear gas canister. The canister fractured his cheekbone and caused extensive damage to his face. Lacking the resources to treat him, doctors at Sitra Medical Clinic transferred Yousif Badah to Salmaniya Medical Hospital, where a medical consultation discovered that the collision had caused irreparable damage when it completely removed Yousif’s left eye from its socket.

“The Badah family is one of many who have suffered from the Government of Bahrain’s weaponization of tear gas,” said Husain Abdulla, Executive Director at Americans for Democracy and Human Rights in Bahrain. “In 2011, many individuals lost their lives due to security forces firing tear gas canisters from a short distance at peaceful protesters.”

Despite his injuries, Yousif Badah is being held for seven days by the public prosecution for interrogation regarding his supposed participation in an illegal gathering.

“The Government of Bahrain should be seeking justice for the extrajudicial killing of Ali Badah. Instead, the public prosecution has chosen to target his father for calling attention to the rampant culture of impunity in the country,” said Sayed Alwadaei, Director of Advocacy at the Bahrain Institute for Rights and Democracy.

The international community has repeatedly called on Bahrain to respect international laws regarding freedom of assembly and expression, which the government continues to ignore in its violent assault on political dissent

“Instead of addressing the legitimate demands of its people, the Government of Bahrain silences dissent by any means necessary, including the weaponization of tear gas,” said Nabeel Rajab, President of the Bahrain Center for Human Rights. “As calls for human rights reform continue to go unheeded, the international community should seriously consider withholding the export of teargas to Bahrain until it is no longer used to commit human rights abuses.”