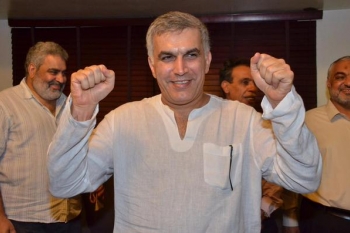 The Bahrain Center for Human Rights (BCHR) welcomes the release of BCHR’s president and leading human rights defender Nabeel Rajab late on 13 July 2015, and calls for all charges against him to be dropped, in addition to the release of all unjustly detained prisoners of conscience, especially those who are suffering from a lack of medical care in prison.

Rajab has been in detention since 2 April  2015 and has completed four months of a six-month imprisonment sentence on charges of “insulting the Ministry of Interior.” The charges are related to a tweet he published in September 2014, in which the military institutions in Bahrain are described as “incubators” of extremist ideologies. Though he was released on “health grounds,”  Rajab still faces up to 10-years’ imprisonment in other cases related to the exercise of freedom of expression. He faces charges of “spreading false news” and “insulting a statutory body” for tweeting about the Saudi-Arabia led coalition air strikes in Yemen and about the torture of detainees at Jaw Prison, which has been documented in several reports by BCHR. (See the latest report: Inside Jau: Government Brutality in Bahrain’s Central Prison)

BCHR encourage the government of Bahrain to consider the health grounds of dozens of reported detainees who suffer from the lack of medical care in prison, including the most recently reported cases of Mohamed Faraj, Hasan Al-Qattan, as well as photographer Hussain Hubail, Mohamed Sahwan, and many other frequently reported cases.

The release of Rajab comes one week after the European Parliament issued a resolution calling for the immediate release of Rajab and other prisoners of conscience. This comes following other calls for the release of Rajab from several parties including the UN Office of the High Commissioner for Human Rights (OHCHR) and the United States.

BCHR encourage the major players of the international community to continue to apply public pressure on the government of Bahrain to secure the protection of human rights in Bahrain and the release of all prisoners of conscience.