Shattering the Facade: A Report on Bahrain's Implementation of the Bahrain Independent Commission of Inquiry (BICI) Four Years On 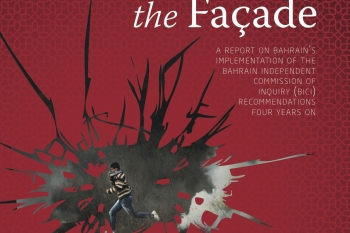 16 November 2015 – Washington, DC – The Bahraini government has only fully implemented two, and has not made any progress on eight of the 26 recommendations made by the Bahrain Independent Commission of Inquiry (BICI) in 2011, finds a new report released today by Americans for Democracy & Human Rights in Bahrain (ADHRB), the Bahrain Institute for Rights and Democracy (BIRD), and the Bahrain Center for Human Rights (BCHR).

Instead, the government has specifically acted to undermine many of these recommendations, undertaking a mass campaign of arbitrary detention to silence dissent, criminalizing free speech and assembly in public and private forums, and holding security forces largely unaccountable for the torture and excessive force that continues to this day.

“The government’s claims to have fully implemented the BICI couldn’t be farther from the truth,” said Sayed Ahmed, Director of Advocacy at BIRD. “Instead, it has actively worked to impede implementation of some of the BICI’s most important reforms, while the human rights situation in Bahrain continues to deteriorate as any sense of urgency the government may have once felt to implement reforms has dissipated.”

The Bahraini government’s piecemeal approach to reform is partially due to a lack of consistent international pressure. Despite Bahrain’s backsliding on reform, the international community only voices its concern over Bahrain’s lack of progress from time to time, insisting that Bahrain must be recognized and rewarded for the steps that it has taken towards reform and reconciliation. However, this report shows that rhetoric from Bahrain’s international allies has made little impact towards pushing Manama to make meaningful progress on reform and reconciliation.

“The Government of Bahrain continues to point to the same cosmetic reforms that have not actually impacted the conditions that led to the events of 2011 or the issues that continue preventing Bahrain from achieving actual progress,” said Husain Abdulla, Executive Director of ADHRB. “Instead of using its significant leverage to push for the release of the country’s thousands of political prisoners, the international community, including the US and UK, has continued to laude cosmetic reforms rather than push for initiatives that could actually contribute to national reconciliation and bolster human rights.”

Four years on, as the government continues to claim that the BICI’s recommendations are no longer relevant, it is even more critical that international allies concerned with Bahrain’s long-term stability and security, particularly the US and UK, push for reform in action. Without the Government of Bahrain’s full commitment to transparently implementing the BICI recommendations, holding security forces and government officials accountable for ongoing human rights abuses, releasing political prisoners, and engaging in a meaningful dialogue with the entire opposition, Bahrain’s persistent unrest will continue and the hope created by the BICI in 2011 may be lost.