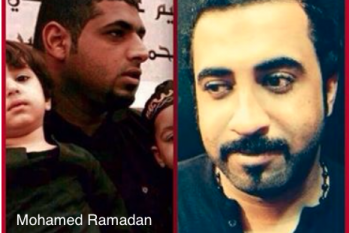 16 November 2015 – Washington, DC - Bahrain’s Court of Cassation today rejected the final appeal of death row inmates and torture victims Mohammed Ramadan and Husain Moosa. The decision finalizes their convictions; absent a royal pardon, the government may carry out their execution at any time. Both defendants allege that they were tortured into confessing the crimes. Americans for Democracy & Human Rights in Bahrain (ADHRB), the Bahrain Centre for Human Rights (BCHR), and the Bahrain Institute for Rights and Democracy (BIRD) condemn the final decision to execute Ramadan and Moosa and call for the government to commute their sentences, and express serious concern that the Bahraini courts have allowed the government to execute defendants that confess under duress.

The government arrested Husain Ali Moosa in February  2014, where Moosa states that security officers subjected him to torture until he confessed to carrying out a bombing attack. According to Moosa, government agents hung him from the ceiling for three days and took turns beating him with police batons. He additionally states that they threatened to harm his relatives, on several occasions claiming that they would rape his sisters. Moosa confessed as a result of the torture, but later recanted his confession in front of the public prosecutor. After he recanted, security forces tortured him further.

Bahraini security forces arrested Mohammed Ramadan on 20 March 2014 without a warrant. During his initial detention, Ramadan alleges that security officers tortured him, violently beating him on his hands, feet, body, neck, and head. In order to stop the torture, Mohammed agreed to “confess to anything.” When Mohamed told a judge that he had been tortured into confessing, security officers tortured him further, placing him in solitary confinement and subjecting him to further beatings.

On 29 December, a Bahraini criminal court sentenced Mohammed Ramadan and Husain Ali Moosa to death for their alleged involvement in a bomb explosion in al-Dair in February 2014. They were sentenced alongside ten other defendants, nine of whom received six years’ incarceration and the last receiving life in prison. The defendants state that the court relied substantially upon the confessions obtained through torture, casting significant doubt on the veracity of their convictions.

At the time of their initial sentencing, Ramadan’s lawyer, Mohammed al-Tajer, stated, “Although the defendants emphatically claim that their confessions were extracted under torture, Bahrain’s courts failed to consider their claims or even open an investigation. Instead, the Bahraini judicial system utilized its anti-terrorism law to justify the death penalty in a case with no concrete evidence of their guilt, but abundant evidence of ill-treatment, torture, and politically motivated charges.”

“Not only did government agents torture Mohammed Ramadan and Husain Ali Moosa, but the prosecutor and the judge did not investigate, ” said Husain Abdulla, Executive Director of Americans for Democracy & Human Rights in Bahrain. “The criminal justice system has altogether failed these men.”

Earlier this year, five UN human rights experts, including the Special Rapporteur on Torture, expressed serious concerns that both Ramadan and Moosa had confessed under duress. The European Union found that Bahrain’s use of the death penalty had expanded to politically-motivated cases in an urgency resolution over the summer, and called for Bahrain to immediately ratify and implement international treaties banning the use of capital punishment.

"For a strong ally of the United Kingdom and United States to take these actions is appalling," Nabeel Rajab, the President of the Bahrain Center for Human Rights. “The international community must act to demonstrate that abuse can never lead to convictions, that torture cannot be the gateway to execution.”

Read the French version of this statement.