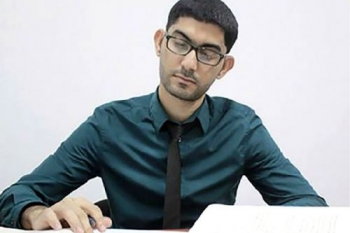 On Monday, Bahraini security forces arbitrarily arrested journalist Mahmood al-Jazeeri, increasing the number of journalists, photographers, bloggers and internet activists under arrest in Bahrain to more than twenty. The Bahrain Center for Human Rights (BCHR), Americans for Democracy & Human Rights in Bahrain (ADHRB), and the Bahrain Institute for Rights and Democracy (BIRD) expresses its grave concern over the authorities’ ongoing policy of targeting free media and journalists.

On Monday, 28 December 2015 at approximately 1:00 A.M., security forces raided the house of journalist Al-Jazeeri’s in-laws. They proceeded to Al-Jazeeri’s nearby apartment, where they confiscated his laptop and mobile phone and arrested him. The security forces did not present a legal warrant to arrest Al-Jazeeri, nor did they inform him or his family of the cause of his arrest. Since his arrest, Al-Jazeeri was able to make one short call to his family to tell them that he was being detained at the General Directorate of Criminal Investigations. Al-Jazeeri’s lawyer stated that he has not been taken to the public prosecution.

Al-Jazeeri works as a journalist with Al-Wasat Newspaper, the only independent newspaper in the country, for which he reports on the activities of the Bahraini Parliament and Shura Council. Al-Jazeeri is well-known for his articles about political detainees and his coverage of discussions in the Shura Council and Parliament. His latest report, in which he covered one of the Shura Council’s member’s demand to remove the housing unit of those who have had their citizenship revoked by the authorities, was considered politically sensitive. The list includes human rights defenders, opposition political activists, and peaceful protesters, all of whom were convicted based on confessions extracted under torture in what BCHR, ADHRB, and BIRD consider to be politically-motivated cases.

The Bahraini authorities have detained dozens of journalists, photojournalists, and bloggers on charges related to the exercise of free expression since 2011. BCHR has reported over the last several years on escalating restrictions, and the implementation of broader and harsher laws to further crackdown on free speech and media. (Read more: http://bahrainrights.org/en/node/7645)

BCHR, ADHRB, and BIRD are concerned that the arrest of Al-Jazeeri is part of the Bahraini authorities’ targeting of journalists free media. The journalist’s arrest is in direct violation of international legal standards, including the right not to be deprived arbitrarily of liberty set forth in the International Covenant on Civil and Political Rights (ICCPR). Article 9 of the ICCPR states that “anyone who is arrested shall be informed, at the time of arrest, of the reasons for his arrest and shall be promptly informed of any charges against him;” Article 17 continues by stating that “No one shall be subjected to arbitrary or unlawful interference with his privacy, family, home or correspondence, nor to unlawful attacks on his honour and reputation.”

Based on the above, BCHR, ADHRB, and BIRD call on Bahrain’s allies and international organizations to put pressure on the Bahraini government to do the following: