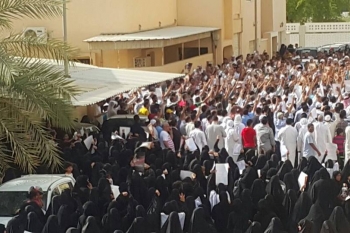 The courts in Bahrain have moved forward to hand down prison sentences against protesters from the Duraz sit-in. Two protesters were sentenced to one year of imprisonment each during the last week, after exceptionally speedy trials that lasted a few weeks only. The Bahrain Center for Human Rights (BCHR) strongly condemns the persecution and prosecution of peaceful protesters and the violation of their right to peaceful assembly and we raise concerns over the safety of the remaining protesters at the Duraz sit-in.

Since late June 2016, in the wake of the citizenship revocation of Bahrain’s Shiite spiritual leader Sheikh Isa Qasim, large numbers of supporters took to the streets of Duraz village in protest of the authorities’ decision, staging an open sit-in in order to show their support for Sheikh Qasim. Despite the authorities’ attempts to either limit participation by restricting access to Duraz, or to deter protesters by increasingly summoning and arresting participants, the sit-in in front of Sheikh Qasim’s house in Duraz has continued since. Previously this month, BCHR has already condemned the extensive violation of the protesters’ freedom of assembly, but the Bahraini authorities pressed forward with the prosecution of what they call “illegal gatherings.”

Despite seasonally understaffed courts and minimal capacities, Bahraini authorities have swiftly pushed forward the prosecution of protesters of the Duraz sit-in and the first sentences have been issued within weeks of trials that started earlier this month. The first court verdict in relation to the Duraz protest was issued on 19 August 2016, in which Shiite cleric Sheikh Ali Humeidan was sentenced to one year in prison. The second sentence, passed on 22 August 2016, concerns Shiite religious reciter Abdullah Subah, who also was convicted and sentenced to one year of imprisonment “over charges of assembling in the Duraz area.”

BCHR is very alarmed by the fast prosecution and the drastic sentences for charges based on peaceful assemblies and protest. We fear that many other protesters and participants of the sit-in will face sentences similar to Humeidan and Subah. The list of possible victims and verdicts is growing longer on a daily basis as the Duraz sit-in continues.

On the same day as Sheikh Humeidan’s trial took place, the first hearing of Sheikh Hamza Al-Dairy’s trial was held, in which he is charged for "inciting hatred against the ruling system, joining among others a public assembly of more than five people and participating in an unannounced gathering." He is also accused of inciting hatred against the regime in a speech delivered at a rally in Duraz. His trial was adjourned to 29 August.

The verdict in two cases of “illegal gathering and inciting hatred against the regime” against the head of the Council of Islamic Scholar (dissolved), Majeed Al-Mishal, whose trial started on 8 August 2016, is scheduled for 30 August 2016.

In a number of similar cases at the beginning of this week, the Shiite clerics Sheikh Ali Naji (Al-Himli), Sheikh Mounir Al-Maatouk, Sheikh Imad Al-Shaala, and religious reciter Mullah Habib Al-Dirazi appeared in court for their first hearings, after which all their trials were adjourned to 30 August. All four were summoned for interrogation earlier this month and kept in custody for 15 days, based on charges for participating in the Duraz sit-in. In total as per BCHR records, at least 14 persons are currently in pre-trial detention for their participation at the Duraz Sit-in.

Since the 2011 pro-democracy movement, the Bahraini government has introduced various laws with tightened restrictions on the right to freedom of assembly. In 2013, the public gathering law was amended, banning all demonstrations unless permitted by the Ministry of Interior. It has especially banned demonstrations in Manama. The Bahraini authorities’ actions are in direct violation to Article 21 of the International Covenant on Civil and Political Rights (ICCPR), which states that “the right of peaceful assembly shall be recognized. No restrictions may be placed on the exercise of this right other than those imposed in conformity with the law and which are necessary in a democratic society in the interests of national security or public safety, public order (ordre public), the protection of public health or morals or the protection of the rights and freedoms of others.”

Through their restrictions on the right to freedom of assembly, the Bahraini government also ignores the recommendations of the second Universal Periodic Review of the UN Human Rights Council, disregarding its own commitment to follow up on these and further distancing itself from international obligations and standards.

We call upon the Government of Bahrain to:
-    Immediately release all those detained for peacefully practicing the freedom of assembly and withdrew all charges against them; and
-    Annul and withdraw any restrictions on the right to peaceful assembly and allow peaceful protesters to exercise their fundamental rights without disturbance and fear of interrogation, arrest or any other form of reprisal.