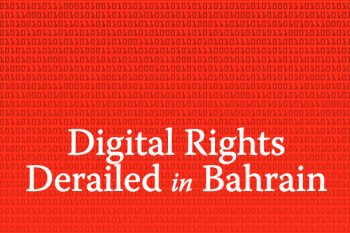 Today, 31 August 2016, the Bahrain Center for Human Rights (BCHR) published a new report entitled “Digital Rights Derailed in Bahrain”, which examines and discusses the measures taken by the Bahraini authorities to tighten their grip on the Internet and increase surveillance of content published online as well as the ongoing prosecution and detention of Internet users.

Since the advent of the Internet in the country in 1995, civil society activists and opposition figures have used it for their activities, such as communications and advocacy. Particularly during and since the 2011 pro-democracy movement, social media platforms have gained widespread popularity. Nowadays, Bahrain is the country with the highest Internet penetration in the Middle East and North Africa region; however, it is also the country in which people feel the least safe to express their opinion, criticize the government or talk about politics.

According to the report’s findings, since 2012, Bahrain’s courts have collectively sentenced at least 40 Internet users to more than 842 months in prison for exercising their right to free expression on the Internet and independent social media. As of August 2016, at least 17 Internet users remain in prison, including BCHR’s President Nabeel Rajab, who is the first person in Bahrain to be tried for “retweets” and now faces up to 15 years in prison. Indeed, from putting bloggers on military trials in 2011, to prosecuting them for whatsapp messages and satirical online content, the reports shows how the Bahraini courts are devoted to passing the harshest sentences to silence the last remaining critical voices online.

Additionally, the report documents five incidents of Internet shutdown or disruption witnessed in Bahrain since 2011, as a regular practice by the government to limit data flow around critical events. The latest of these incidents is still going for over two months in the village of Duraz, impacting over 20,000 residences of the area.

Also in 2016, the reports details how authorities have introduced new restrictive laws and regulations to limit the content published online, including a regulation to restrict newspapers’ usage of video reporting online, as well as to completely ban live broadcasting, and another regulation to force Internet service providers to use a unified filtering system that should aid the government’s efforts to censor the Internet. With the current situation of hundreds of websites blocked, including BCHR’s own website, the report’s findings reveal that Bahrain is misusing terms like “fighting terrorism” to block any website that is critical to the government’s views.

“After detaining most of the critical voices, including political leaders, and locking  human rights defenders inside the country with travel bans, and successfully controlling the traditional press, the Internet has become the latest target by the government,” said BCHR’s Vice-President Said Yousef Al-Muhafdah. “The government wants to shut down the last window for people’s voices and place a complete blackout on Bahrain, so the Internet becomes a tool for sharing photos of your dinner, not more.”

In “Digital Rights Derailed in Bahrain”, BCHR outlines how Bahrain’s regulations and consequent actions are in direct violation of international covenants, which guarantee the right to freedom of expression over any platform.

The report starts with an analysis of the existing and newly introduced legislation and regulatory bodies, then shows how these instruments are used to increase the government's influence over Internet users, how filtering mechanisms work, how information is manipulated and how dissenting individuals and organisations are targeted. Furthermore, “Digital Rights Derailed in Bahrain” gives extensive insight into the personal story and fate of many Internet users and social media activists, who fell victim to the state authority's surveillance apparatus. The report concludes with various recommendations for the Bahraini government as well as the international community on how to achieve change and ensure freedom of expression in Bahrain.

The report is sponsored by IFEX, the global network for freedom of expression, of which BCHR is a member. Read full report here

The report will be launched during the “Opinions are not crimes” event, organized by BCHR together with Global Copenhagen (VerdensKulturCentret) at Nørre Alle 7, 2200 Copenhagen N, Denmark, starting at 18.00 and ending at 20.00. We would be pleased if you attend the event!