Bahrain: One Year in Prison for Each Day at Duraz Sit-in 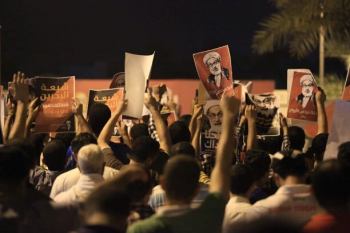 The Prosecution of Duraz Protesters Continues: 11 Verdicts so far.

Bahrain’s courts continue to convict protesters over their peaceful participation in the ongoing Duraz sit-in. The Bahrain Center for Human Rights (BCHR) is deeply worried about the abyssal neglect of basic human rights in Bahrain and condemns the recent court rulings with their disproportionately lengthy prison terms, which solely serve to silence political dissent and to further deter protesters from expressing their opinions freely.

The most recent case concerns Habib Al-Dirazi, a 19-year-old Islamic preacher, who has been sentenced to two years imprisonment for participating in the Duraz protests. Last week, on 21 September 2016, a Bahraini court confirmed and upheld the sentence issued against him. Al-Dirazi joined the sit-in in Duraz for two days (25 and 26 June). In the aftermath, a case was raised against him for each day that he participated in the protest under charges of “illegal gathering.” The court sentenced him to one year in prison for each of these days.

Since late June 2016, thousands of Bahrainis gathered in Duraz to stage an open-ended sit-in in order to show their support for Shia leader Sheikh Isa Qassim, whose citizenship was revoked by the government. Despite the authorities’ attempts to limit participation by restricting access to Duraz and to deter protesters by increasingly arresting protesters, the sit-in has continued for about 100 days. BCHR has previously condemned the excessive violations of freedom of assembly and expression, but Bahraini courts continue to prosecute Duraz protesters for what is termed “illegal gatherings.” Since 19 August 2016, when the first sentence was issued against Shiite cleric Sheikh Ali Humeidan, eleven defendants in eight cases have been sentenced to a total of 12 years in prison over their participation in the Duraz protests. The verdict against Al-Dirazi is thus another one in a series of disproportionately lengthy prison terms for peaceful protest against the government’s politics.

The government’s actions are in direct violation to Article 21 of the International Covenant on Civil and Political Rights (ICCPR), which states that “the right of peaceful assembly shall be recognized. No restrictions may be placed on the exercise of this right other than those imposed in conformity with the law and which are necessary in a democratic society in the interests of national security or public safety, public order (ordre public), the protection of public health or morals or the protection of the rights and freedoms of others.” Disregarding such international obligations, the Bahraini government has moved forward to restrict the right to freedom of assembly and expression since the 2011 pro-democracy movement. In 2013 for example, all demonstrations, particularly in the capital Manama, were banned unless permitted by the Ministry of Interior.

The legal restrictions on the right to free assembly and speech as well as recent court rulings on Duraz protesters manifest the Bahraini government’s neglect to follow up on the recommendations of the second Universal Periodic Review of the UN Human Rights Council (UNHRC). This disregard for its own commitment to follow up on the recommendations  has also recently been stressed by NGOs in a joint statement during the 33rd session of the UNHRC.

We call upon the government of Bahrain to: