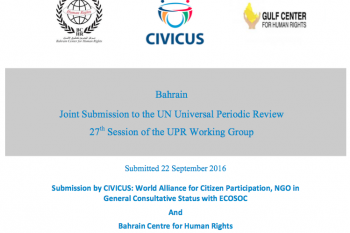 On 22 September 2016, CIVICUS, the Bahrain Center for Human Rights (BCHR) and the Gulf Centre for Human Rights (GCHR) made a joint submission to the United Nations’ Universal Periodic Review (UPR) ahead of Bahrain’s review in 2017. The submission examines the Bahraini government’s compliance with its international human rights obligations, as the extent to which the recommendations of the previous UPR in 2012 have been fulfilled remains debatable. Several different sectors are addressed by the UPR such as, Freedom of Assembly, Human Rights Defenders, Journalists, Civil Society Representatives, Freedom of Expression and the Right to Peaceful Assembly. These are all core to the objectives of the three organisation in their pursuit of a just human rights environment in Bahrain.

Firstly, the UPR addressed Freedom of Association and put forward ten recommendations, which were all accepted by the authorities in Bahrain. Among others, the government committed to “abandon any restriction or obstacle to the work of persons and institutions engaged in the protection and promotion of human rights.” However, according to the three organisations, nine out of ten of the recommendations were not implemented in practice. This highlights the government’s disinterest in providing a secure human rights environment in Bahrain, as human rights, opposition, religious and other civil society groups have been harshly punished.

Secondly, five recommendations concerning harassment, intimidation and attacks on human rights defenders (HRDs), journalists and civil society representatives were presented. Once again, the Bahraini government accepted the majority, by accepting four and noting one. The authorities committed to ensuring “that HRDs must be protected and allowed to conduct their work without hindrance, intimidation and harassment.” However, this does not seem to have been the case in the aftermath of the agreement, as HRDs, journalists and civil society representatives are continuously punished for their work. In addition, the joint submission concluded that none of the five recommendations were implemented.

Lastly, the previous UPR addressed 17 areas of improvement related to the right to peaceful assembly. They were all accepted by the government, however as a now recurring theme, they were not implemented. Furthermore, Article 21 of the International Covenant on Civil and Political Rights (ICCPR) guarantees freedom of assembly. This in turn, contradicts the actual situation in Bahrain concerning peaceful assembly, as demonstrations and peaceful marches are routinely violently dispersed.

As outlined, several recommendations have not been fulfilled nor even pursued by the Bahraini government. This raises concern for civil society, as it illustrates a lack of commitment and lack of will to improve the human rights climate in Bahrain.

As a result, we call upon the Bahraini government to:
Read the full report here.