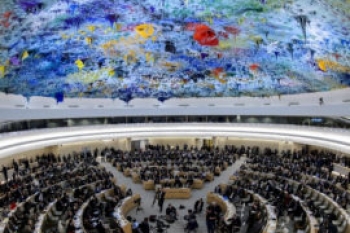 A total of 175 recommendations have been made to Bahrain by the Human Rights Council during Bahrain’s Universal Periodic Review (UPR) on 1 May 2017.

The Bahraini delegation in Geneva rejected criticism from UN member states despite evidence of human rights violations collected by many NGOs, including BCHR. Ahead of this review, many members of the main Bahraini human rights organizations had been prevented from travelling and taking part to the UPR process by the authorities. BCHR members have been particularly targeted, with four of our members affected by travel bans as an act of reprisals. The continued restrictions on NGOs and the recent travel bans, have sent a clear message to independent human rights organizations that there is no space for criticism in the international arena like the UN.

Freedom of association and protection of Human Rights Defenders

Many countries therefore recommended to Bahrain to uphold freedom of association and respect the work of human rights defenders. Ireland, in particular, recommended that Bahrain takes urgent steps to facilitate the work of civil society and human rights defenders, and guarantee protection of all persons from intimidation or reprisals for seeking to cooperate with the UN. Denmark recommend that Bahrain release all arbitrarily detained persons in Bahrain including Danish-Bahraini citizen Mr Abdulhadi Al-Khawaja a victim of torture, who just suspended his hunger strike, following strong UPR recommendations made to Bahrain on the release of political prisoners and activists.

Following Bahrain’s review by the UN Committee Against Torture, member states made numerous recommendations during Bahrain’s review.  Among others Belgium, Norway, Czech Republic, and Italy issued recommendations relating to the use of torture in Bahrain. Member states urged the state party to investigate allegations of torture, investigate individuals found responsible, and implement measures that allowed for the prosecution of perpetrators.

Another particular concern was the use of military courts in Bahrain. The Netherlands recommend that Bahrain rescind the amendment of law 105b that allows for civilians to be prosecuted in military courts if accused of terrorism. Czech Republic recommended that Bahrain review the Anti-terrorism law and its implementation in order to ensure it could not be abused for harassment, detention and prosecution of dissenters.