Urgent Appeal: Rights activists and bloggers are tortured and forced to suspend and resign from their activities 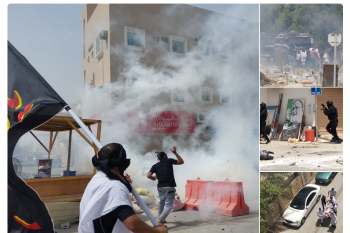 The year 2017 began with many political repercussions in Bahrain and far from any reform progress at all levels, including the political, human rights, economic, civil and social levels. Attempts are still continued to silence the voices calling for the transition toward democracy. The most recent was the suppression of a peaceful sit-in in Duraz area in a systematic policy to eliminate all forms of movement demanding rights and freedoms.
Joint forces of security raided the area of Duraz with tear gas and fission bullets, and caused the deaths of five citizens and dozens wounded and the arrest of 286 people from the site of the sit-in when raids on houses and residential neighborhoods continue and the arrest of individuals is monitored until this very moment.
This security campaign concurred with the summoning of a group of human rights defenders and activists in documenting and monitoring violations from the ground, along with some social media bloggers. During the investigation, they were subjected to torture, ill-treatment and intimidation by the National Security Agency amid pro-government media campaign carried against them in the country.
In May of this year, a number of human rights defenders entered for interrogation by the National Security Service, inside the security complex, the third floor. An interrogation was initiated against the law for long hours while standing and blindfolded for this entire period. Lawyers were not allowed to follow the proceedings of the investigation, in which these activists were severely beaten.
These activists have also been subjected to religious slur, insulting, , defamation, verbal harassment, sexual assault and electric shocks, as well as attempts to intimidate them by some of their family members if they do not leave their work with local and international human rights organizations. Interrogators have asked them to inform their colleagues to stop working in this field and some were forced to post on Twitter stating their suspension of activities in human rights and media.
The undersigned human rights organizations strongly oppose the continued intimidation of human rights defenders in Bahrain and assert that their detention, ill-treatment and torture are tools used to limit activities of civil society to modify, correct and develop human rights conditions in the country.
In an escalation that the undersigned organizations object to, the interrogation sessions were directed at imposing flagrant threats to arrest and torture all human rights activists and individuals without regard to the international human rights system and mechanisms, in particular the Office of the Higher Commissioner for Human Rights OHCHR and the United Nations’ Special Rapporteurs.
Accordingly, the undersigned NGOs call upon the Bahraini government to respect the constitutional principles and abide by the Universal Declaration of Human Rights Defenders. We also urge the authorities in Bahrain to take the necessary measures to stop the targeting of human rights defenders as well as to activate the international mechanisms that protect members of civil society organizations who are living in difficult and dangerous situations and are eyewitnesses to the recent repression inside the country.
This statement confirms that these measures are attempts by the state to silence any voices calling for reform on the rights level, amidst procrastination in issuing a democratic law for civil action instead of the arbitrary law that allows for serious security interventions in civil societies work and activities.
Amid a hostile political environment that does not guarantee the free exercise of human rights groups and organizations and in a context that violates the international right to freedom of opinion and the shrinking of the public sphere for those who carry out activities that preserve human rights in the country, we, the undersigned organizations affirm that these harassments are reflecting clear intentions; to besiege and stifle the activities and initiatives of human rights organizations, and to try to make human rights work - whether through organizations or through initiatives - a risky process.
The signatories:
• SALAM for Democracy and Human Rights
• The European-Bahraini Organization for Human Rights
• Bahrain Forum for Human Rights
• The Gulf Institute for Democracy and Human Rights
• Bahrain Centre for Human Rights
• The International Center for Supporting Rights and Freedoms