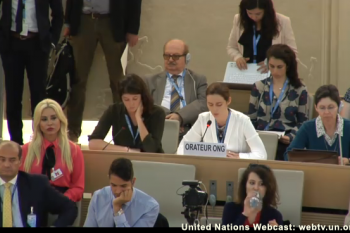 Address made to the Special Rapporteur on Freedom of Opinion and Expression, David Kaye.

One year ago, on that day, Nabeel Rajab was arrested from his home, one day before he was due to participate in the UN Human Rights Council. One year on, Nabeel Rajab remains in jail; his health is gravely deteriorating, he has been subjected to inhumane and degrading treatment, denied appropriate health care and he has spent extensive periods of time in solitary confinement. And still, this Council remains silent.

He has been held illegally pending trial for one year, only for expressing his opinions on social media, for tweets and retweets he made regarding the war in Yemen and allegations of torture in Bahraini prisons, in addition to media interviews. He faces up to 18 years in prison if convicted on all charges.

Last year, human rights experts, including yourself, Mr. Special Rapporteur, called on the Bahraini government for Nabeel Rajab’s immediate release, and for all charges against him relating to freedom of expression, to be dropped. A year ago there was some hope that the international community would support your call and pressure the Bahraini authorities to set him free. We are still waiting for this Council to act.

This sad anniversary comes in the context of unprecedented harassment and violent pressure directed at all critical and independent voices in the media, political parties, and trade unions, which are fighting now simply to be allowed the right of peaceful expression. The numbers of individuals arrested over charges related to free expression on the Internet and social media websites have significantly increased. Journalists, human rights defenders, bloggers, and active members of civil society have been targeted by the government, including being interrogated, sexually assaulted and tortured and forced to stop their human rights activities. Foreign members of the media are being denied entry to the country, whilst Bahraini journalists are being denied licenses to work for foreign media outlets, like Nazeeha Saeed, an award-winning Bahrain correspondent for France 24 who was recently found guilty of reporting without a license. The crackdown directed at the human rights movement and the persecution of independent, critical voices in Bahrain is not only a challenge faced by activists like Nabeel Rajab and others. It is a decisive moment as well for the cohesion and stability of Bahrain. The targets of the government are currently all those critical and independent voices standing against social violence, violent extremism, terrorism, and sectarianism.