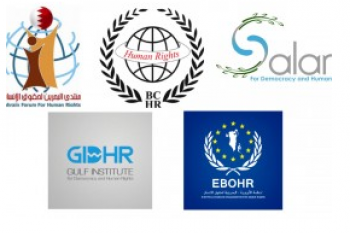 The undersigned human rights organizations call upon the International Committee of the Red Cross (ICRC) to urgently visit Bahraini prisons to stand upon their situation and invite UN Special Rapporteurs and relevant UN working groups to submit new applications to visit Bahrain.

The organizations are calling on Member States of the Human Rights Council to exert serious pressure to be allowed to have unconditional access to all places of detention and meet any prisoners to know the reality of the situation in all prisons as well as activating the mechanisms of international control.
In the same time, the signatories call on the government of Bahrain to respect international covenants, notably the Convention against Torture and Other Cruel, Inhuman or Degrading Treatment or Punishment. They urge to respect the rights of prisoners determined by the Reform and Rehabilitation Law in the prison administration and its executive regulations that goes in parallel with the Standard Minimum Rules for the Treatment of Prisoners and modify the texts that do not conform with the later rules.

According to documented statistics, the number of detainees and prisoners in Bahraini prisons has reached 4,000 prisoners, including 12 women. Since 2011, the total number of arbitrary arrests has reached more than 12,000 including 330 women, 968 cases of children including 3 female children, where more than 4000 citizens were subject to torture or abuse and ill-treatment.

In addition, the information reaching out to us confirms the overcrowding of prison cells by more than 50% of their capacity, with the continuation of humiliating inspections, the confiscation of personal belongings, and the practice of a number of abuses against prisoners, which deprive them of basic rights.

In September of this year, prisoners of conscience organized a hunger strike to demand improvement to their detention conditions: stopping torture and ill-treatment, providing medical care, opening the praying area for prayer and religious services, providing a waiting room for visiting families, removing the plastic barrier inside the visits rooms, improving the quality of meals and other demands. Previous reports from inside Bahraini prisons said prisoners have been exposed to food poisoning due to poor food quality, contrary to Rule 20 of the Standard Minimum Rules for the Treatment of Prisoners.

In March 2015, the security authorities punished prisoners in Jau central prison in a collective manner after disturbances in the prison. The security authorities resorted to excessive use of force to quell the prison protests, and forced detainees to sleep outside their cells and subjected them to various forms of cruel, degrading and inhuman treatment in clear and explicit violation of rules 10-14 of the Standard Minimum Rules for the Treatment of Prisoners and Article 10, paragraph 1, of the International Covenant on Civil and Political Rights that guarantees respect for the inherent dignity of all persons deprived of their liberty.

Ill detainees and prisoners, particularly those suffering from chronic diseases, suffer from inadequate medical care and treatment to prevent any health deterioration, when the UN recommendation clearly calls for adoption of the Standard Minimum Rules for the Treatment of Prisoners.