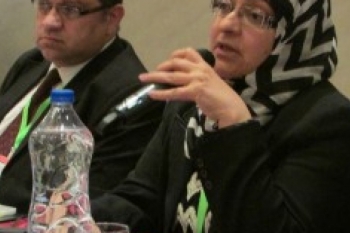 Following democracy protests in Bahrain in February 2011, al Salman was unjustly imprisoned for six months. She was threatened, beaten and subject to acts of humiliation and torture by the authorities because of her trade union activities.

Unwavering commitment to democracy, equality and human and trade union rights despite public harassment by authorities

Following her release from prison, al Salman has continued to be a vocal champion for the rights of teachers and students, despite continued threats, intimidation and detentions.

An ardent campaigner for the rights of women and girls in Bahrain and the region, she has been an active representative and contributor to the Education International (EI) World Women’s Conference, UN Commission on the Status of Women and other meetings to advance the goal of equality for women and girls.

Under al Salman’s leadership, the Bahrain Teachers Association (BTA) is a recognised and vital member of the EI global trade union family. She continues to work to ensure a voice for Bahrain's teachers within EI. She has also contributed to efforts to build EI's regional structures for member organisations within the Arab countries in the Middle East.