Bahrain Center for Human Rights: 2018 Is the Year of Death Penalty 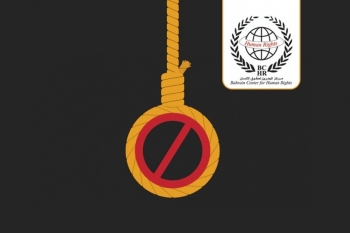 Bahrain Center for Human Rights condemns the two death sentences issued today against Zuhair Ibrahim and Mohamed Mahdi. BCHR also deplores the Bahraini judiciary's insistence on issuing death sentences which reached to 35 death sentence sentences from 2011 until today. The judiciary has executed three cases in 2017. BCHR calls upon the Government of Bahrain to withdraw and repeal these provisions and to sign and accede to the Second Optional Protocol to the International Covenant on Civil and Political Rights on the abolition of the death penalty.

BCHR believes that Bahrain's criminal laws and legislations are full of the death penalty, especially in issues related to freedom of opinion and expression and the exercise of political rights that are considered by the Government of Bahrain as crimes leading the victims to malicious accusations against many of the accused victims. The death sentence in this year (2018) was 19. All of these judgments came from unfair trials and did not comply with fair trial guarantees. BCHR documented many of these cases of torture of those sentenced to death.