Bahrain: The Court of Cassation supports the sentence against Nabeel Rajab for five years in prison. 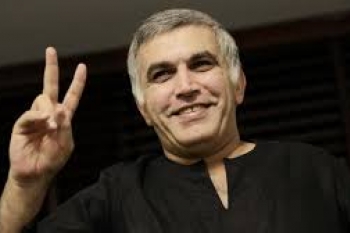 The Bahrain Center for Human Rights (BCHR) condemns the sentence issued by the Court of Cassation on December 31, 2018, against the president of the Bahrain Center for Human Rights, Nabeel Rajab, and his five-year imprisonment, after being convicted of criticizing Bahrain's participation in the Yemen war and his tweets on Twitter testifying about torture at Jaw's Central Prison.

The Grand Criminal Court sentenced Rajab to five years in prison on February 21, 2018. The sentence is added to a previous one of two years in a case involving freedom of expression (FOE). The court convicted Rajab under Article 133 of the Penal Code, which criminalizes "broadcasting false rumors in wartime", article 215 on "insulting a foreign state in public" and article 216 on "insulting official bodies".

Rajab is one of the most courageous defenders of human rights in Bahrain and suffers from constant harassment and ill-treatment in Jaw's Central Prison where he is currently imprisoned.

Maytham Al Salman from the Bahrain Center for Human Rights stated after rejecting the appeal of Nabeel Rajab and the court’s decision to support the sentence against him in the case of criticizing the war on Yemen that : “Nabeel Rajab was sentenced for opposing war in Yemen and calling for a peaceful reconciliation for humanitarian reasons. Today, the United Nations and the international community are advocating Nabeel Rajab’s message and the War in Yemen can possibly end very soon after accepting the exchange of prisoners between parties involved in the conflict.”

He added: “Nabeel Rajab should be rewarded rather than imprisoned for his call to end the war in Yemen for humanitarian reasons.”

The Bahrain Center for Human Rights believes that the continued detention of the activist Nabeel Rajab in prison is a continuation of the punishment imposed by the government against those who carry out their professional and humanitarian duty to advocate for human rights issues. The Government of Bahrain continues to punish human rights activists for their work in exposing human rights violations. The sentence against Nabeel Rajab reveals the persistence of the Government of Bahrain in violating human rights laws and its disregarding of international covenants and conventions ratified by Bahrain, particularly the International Covenant on Civil and Political Rights (ICCPR), which states: "No one shall be punished for exercising his right to freedom of expression.

The Bahrain Center for Human Rights calls upon Bahrain's allies to pressure the government of Bahrain to:

- Immediate release of Nabeel Rajab and drop the charges against him

- Respect international covenants and conventions, especially those relating to the need to preserve the right to freedom of expression