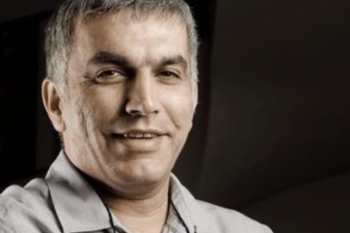 We call on the Government of Bahrain to immediately and unconditionally release prominent human rights defender Nabeel Rajab and to ensure that all Bahrainis are able to exercise their rights to freedom of opinion and expression without fear of arbitrary detention.

Rajab has been imprisoned since June 2016 for tweeting in 2015 about Saudi Arabia’s airstrikes in Yemen and allegations of torture inside Bahrain’s Jau Prison. One such tweet read as follows: “We have the right to say no to the war in #Yemen and should struggle for peace and security but not bloodshed #Sanaa.” On Monday this week, Bahrain’s highest court – the Court of Cassation – upheld Rajab’s conviction and five-year prison sentence on charges of "spreading false news and rumours in time of war", "insulting foreign countries" and "insulting publicly the interior ministry". The UN Working Group of Arbitrary Detention had last year declared Rajab’s detention to be arbitrary.

Monday’s court decision brings into focus the continued suppression of Government critics in Bahrain through arbitrary arrest and detention, travel bans, harassment, threats, revocation of citizenship and other means. There have been numerous reports of human rights defenders, political activists, journalists and opposition figures being targeted for the exercise of their rights to freedom of expression, peaceful assembly and association. The UN Secretary-General’s report on reprisals in September 2018 highlighted several specific cases where civil society activists and their families in Bahrain suffered reprisals for seeking to engage with UN human rights mechanisms, including the Human Rights Council. In some of the cases, the activists were accused of terrorism-related offences.

The arrest, detention and imprisonment of individuals for the exercise of their fundamental human rights is in violation of Bahrain’s obligations under the International Covenant on Civil and Political Rights, which it has ratified. We urge the Government of Bahrain to stop criminalising dissenting voices.