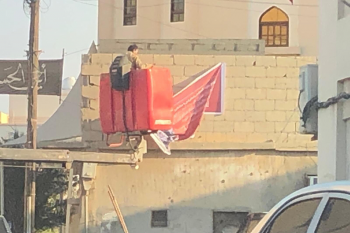 Bahraini Shiites celebrate “Ashura” on the month of Muharram every year in honor of Imam Hussein, the son of Prophet Muhammad’s daughter. Every year, Bahrain witnesses numerous violations related to Ashura, which reveal the false claims of the government to respect the constitutionally and legally guaranteed freedom of religion.

With the beginning of Muharram this year (2019), which was on September 1, the Bahraini authorities have taken several measures that are considered official harassment. Authorities have summoned preachers and clerics for participating in religious lectures related to Ashura, interrogating and arresting some of them, and assaulting Ashura's rituals by removing banners bearing religious phrases.

The Bahrain Center for Human Rights (BCHR) also monitored a number of attacks on Ashura rituals in various areas in Bahrain by police forces. BCHR recorded at least 17 attacks on Ashura manifestations in different areas in Bahrain through the removal of banners and religious phrases related to Ashura. Among these areas are Muharraq, Bilad Al Qadeem, Al Markh, Abu Saiba, Al Musalla, Al Malikiyah and Nabih Saleh.

BCHR believes that the Shiite clerics and preachers pay the tax of participating in these occasions every time through summonses and investigations leading to arrest and imprisonment.

BCHR believes that these measures, which are still being carried out by the Bahraini authorities, are a clear restriction and an infringement on the freedom of religion, which the Government of Bahrain has stated to respect on many occasions. It is certainly a violation of the rights of individuals and groups to exercise their religious freedoms that the authorities must respect and promote respect for. It is also very unfortunate that the headlines of respect for human rights and freedoms are merely media allegations and have nothing to do with reality.

Bahrain Center for Human Rights therefore calls on the Government of Bahrain to: