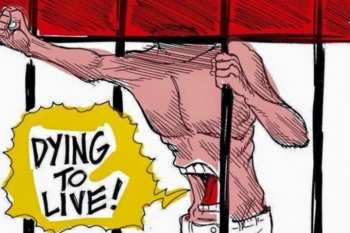 On 10 October 2019, a group of inmates in Jaw Central Prison started a mass hunger strike to demand an improvement of the poor conditions in the prison, and that measures are taken by the prison administration regarding family visits and other matters that prisoners consider retaliatory and restrictive.

Prisoners in Bahrain suffer from severe and variable measures and a continuous restriction on their basic rights. More than 500 prisoners went on a hunger strike a few months ago for the same mentioned reasons. They broke their strike after administrative promises to meet their demands, but these promises were not fulfilled. The prisoners therefore resumed their hunger strike, which indicates that their poor conditions have not been improved.

The hunger strikers are demanding that prison guards:

- respect their families during the visits;

- remove glass barriers that prevent direct contact with parents, and to facilitate the procedures followed during the visit time;

- extend the visit time to one hour instead of half an hour and increase the number of monthly allowed visits, currently only one visit a month is allowed,

-giving married prisoners the right to meet with their wives and give them extra time.

The Bahrain Center for Human Rights (BCHR) has previously showed concern about the conditions inside the prisons which lead prisoners to go into hunger strikes as an expression of their protest against what they are subjected to.

According to former prisoners who spoke to BCHR, conditions in the prison are bad in terms of the treatment of prison guards for prisoners. The guards search the cells in humiliating ways such as destruction and confiscation of personal properties. They mention as well the absence of uniform law and standards within the prison to deal with prisoners, where each official comes with a group of guards who perform different procedures from the procedures carried out by other groups that enter the cells and inspect each time.

BCHR considers that prisoners are subjected to abnormal procedures and sometimes to deliberate measures taken to further restriction on prisoners, particularly those convicted on political issues. What they are subjected to is considered a violation of the Standard Minimum Rules for the Treatment of Prisoners.

Therefore, the Bahrain Center for Human Rights (BCHR) calls upon the Bahraini authorities to:

- Stop all unnecessary and inhumane measures against prisoners;

- Meet the demands of prisoners and ensure that the hunger strike is not repeated;

- Establish specific mechanisms for dealing with prisoners and hold police officers accountable (prison guards and those responsible for the abuses suffered by prisoners).