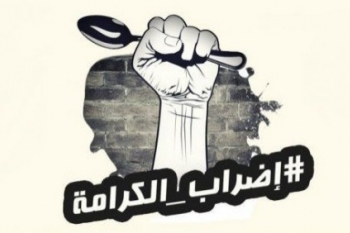 The Bahrain Center for Human Rights (BCHR) has learned that 13 people convicted to death have begun a hunger strike to demand better conditions of detention and to amend the measures taken recently by the prison administration, especially the decision to reduce the visit to only once every two months for a period not exceeding 30 minutes; not to mention the glass barrier that prevents direct contact between the detainee and his family.

According to testimonies from former prisoners and testimonies of relatives of prisoners, Bahraini prisoners suffer from severe and persistent harassment and deprivation of basic rights. This is not the first time that prisoners have gone on hunger strike. A month ago, more than 400 prisoners in the Dry Dock and Jaw Central Prison went on hunger strike to protest against what they saw as harassment and deprivation of their basic rights as prisoners. When the prison administration intervened, the prisoners broke their strike after promises of improvement, but things are still the same.

The hunger strikers are demanding that the search by prison guards of prisoners and their relatives be refined; to remove the glass barriers that prevent direct contact with their families; extend visit time; and allow married prisoners extra time with their wives.

In a previous statement, BCHR discussed the deteriorating conditions inside the prison and the procedures and harassment of prisoners, which leads them to the possibility of hunger and thirst and the consequences of the strike (isolation, beatings and insults) in order to achieve their demands.

Activists on social media posted audio recordings of prisoners on death row announcing their hunger strike and complaining that the prison administration was not interested in their demands. According to previous testimonies, procedures and harassment by vandalizing prisoners' property and personal needs and subjecting them to humiliating searches have exceeded reasonable limits, so that they are applied to their relatives as well. The prisoners are confused and unstable. They also talked about the absence of the law and the standards set within the prisons. Each shift official has different laws that conflict with other officials, which makes the prisoners confused and unstable.

BCHR considers these measures to be a flagrant violation of prisoners' rights and opposes the Standard Minimum Rules for the Treatment of Prisoners.

Therefore, BCHR calls upon allies of the Government of Bahrain to:

It also calls on the authorities in Bahrain to: