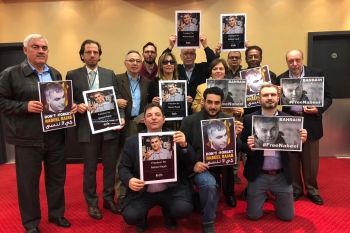 In the Belgian capital, Brussels, the Bahrain Center for Human Rights (BCHR) organized a stand in solidarity with the president of the Center, detained human rights activist Nabeel Rajab, on December 10, 2019. This coincided with the International Human Rights Day and in the presence of a number of international human rights organizations.

It is worth mentioning that in 1999, the General Assembly adopted the Universal Declaration of Human Rights, which articles emphasize that human rights must be a priority whatever the circumstances. The Declaration also states that rights are common to all and that equality, justice, and freedom represent peace and safety.

Amnesty International stated in its report on the review of the human rights situation in the Middle East (Bahrain section) that “The punitive nature of Bahrain's prison procedures continued to dominate, with detainees being humiliated, denied medical care, or unjustifiably delayed it. Prisoners of conscience in Bahrain's Jaw Central Prison called for nothing more than medical care and better services.”

Commenting on the humanitarian situation in Bahrain, Ireland's top diplomat and Foreign Minister Simon Coveney said that “the human rights situation in Bahrain remains a concern” and that he is “aware of reports of inhumane conditions of detention as well as reports showing that political prisoners in Bahrain have been tortured”. He calls on Manama and all countries to respect the human rights of prisoners and detainees.

In 2019, the Office of the United Nations High Commissioner for Human Rights called on Bahrain to release Bahraini human rights activist Nabeel Rajab. The spokesperson for the UNHCR, Ravina Shamdasani also reported that: “The court's decision highlights the continued repression of opposition by the government of Bahrain through arbitrary arrest, travel bans, harassment, threats, and withdrawal of nationality and other methods.”

The International Federation said that the human rights icon Nabeel Rajab entered his fourth year today (Friday 14 June 2019) and is in prison only for defending human rights. In a statement, the federation said that Rajab was subjected to “judicial harassment and parody of justice in trials,” stressing that his sentence of seven years in prison in two different cases was condemned by the international community.

Bahrain has a worrying human rights record, as witnessed in the reports issued by human rights organizations until today. We, therefore, call upon the member states of the Human Rights Council not to condone such violations committed in places of detention in Bahrain and to release immediately the prominent human rights activist Nabeel Rajab.