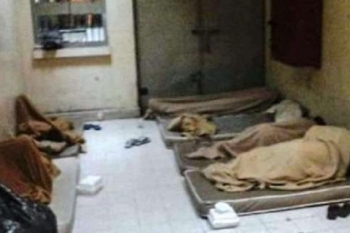 Universal Health Coverage Day is at the top of the World Health Organization's goal list in order to ensure that everyone gets the care they need, when they need it. However, millions of people around the world are still denied any access to health care.

On this occasion, which coincides on the 12th of December, and in light of the international community's continuing shameful engagement with human rights issues in Bahrain, especially while prisoners are still suffering, the Bahrain Center for Human Rights (BCHR) would like to remind the international community of its responsibility towards human rights issues and the ongoing violations taking place in Bahrain. These violations including those related to the medical rights of prisoners and detainees, and to the increased suffering of detainees and the ill-treatment they are subjected to at the hands of the responsible police officers inside the prison.

The Acting President of BCHR and Vice-President of the International Federation for Human Rights (FIDH), Nidal Al-Salman emphasized the suffering of the detainees from the continuous harassment, mistreatment and deprivation of human rights, including receiving treatment and taking medications, which caused the spread of many diseases on the one hand, and the deteriorating health conditions of some detainees on the other hand.

According to reports received by BCHR from Jaw Central Prison, many detainees suffer from "diabetes", and face difficult health conditions due to the denial of the necessary treatment, as 10 prisoners with severe illness frequently fall inside the prison because of the lack of provision of required health care. Moreover, a report prepared by 10 activists inside the prison stated that there are risks to the lives of a number of sick patients, while the prison authorities continue their procedures in preventing medicines and refusing to transfer them to outpatient clinics, in addition to the poor public health conditions inside the prison.

Bahrain's prisons contain thousands of prisoners, including nearly 4,000 prisoners on issues related to freedom of expression and the political situation in Bahrain. Many of them suffer unfair and inhuman prison conditions, and about 600 prisoners recently went on hunger strike to protest against poor conditions and mistreatment inside the prison. Hunger strike is the way which the prisoners resort to every time to demand an improvement in their conditions.

On the conditions in Bahrain's prisons, Human Rights Watch said in a statement issued in October 2019 that the prison authorities in Bahrain "arbitrarily deprive prisoners of urgent health care, refuse to present them to specialists, and do not reveal the results of their medical examinations; authorities also withhold medication as a form of punishment related to detainees’ prominent roles in the opposition and protests".

Joe Stork, deputy director of the Middle East division at Human Rights Watch said: “It is shameful that the Bahraini authorities are denying prisoners the medical care they urgently need, sometimes putting their lives at risk.” He added: “Many of these people should not have been imprisoned at the first place, and arbitrary deprivation of medical care may amount to extrajudicial punishment".

On this day, BCHR calls on the authorities of Jaw Central Prison and all prisons in Bahrain to abide by the provisions of international law and standards for human rights in treating prisoners. Bahrain, as a state party to the International Covenant on Economic, Social and Cultural Rights, is legally obliged to respect, protect and fulfill “the right of everyone to the enjoyment of the highest attainable standard of physical and mental health” of detainees and prisoners. Furthermore, the Nelson Mandela Rules stipulate in Rule 27 thereof that prisoners whose condition requires specialist treatment must be transferred to specialized institutions or to hospitals outside the prison when such treatment is not available in prison.

BCHR calls on the government of Bahrain to take necessary measures to reduce violations and stop ill-treatment of prisoners, especially those related to medical care, and to develop strict laws that protect prisoners from being subjected to violations and hold accountable those found to be involved.