Mohamad Ramadan and Hussain Moosa at Risk of Execution 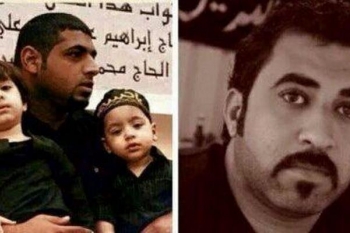 The Bahrain Center for Human Rights (BCHR) is highly concerned about the cases of Mohamad Ramadan and Hussain Moosa, sentenced to death, and therefore, urgently calls for the stop of all death sentences in Bahrain.

In December 2014, the two men were sentenced to death following a bombing that killed a police officer in the village of al-Dair on 14 February 2014.

In 2015, the Court of Cassation upheld the death sentence of Muhammad Ramadan and Hussein Musa for their alleged involvement in the killing of a policeman. Both were tortured by interrogators resulting in enforced confessions.

Today, on 08 January 2020, the Fourth Supreme Court of Appeals upheld the death sentence of both men. The court based its judgment on confessions obtained under conditions of torture, where detainees were subjected to ill-treatment and incommunicado detention in circumstances of enforced disappearance.

Human rights organizations report that Hussain Moosa and Mohamed Ramadan were severely tortured which led to extracted confessions, which served as the main evidence in their trial for the murder of the policeman, Sayed Mohamed Faqir during a bombing in the village of al-Dair.

International standards, including the "Arab Charter on Human Rights", which Bahrain ratified, stipulate that countries that adopt the death penalty must use this punishment only for "the most serious crimes", and in exceptional cases. Many human rights defenders and organizations issued urgent appeals to rescue detainees Mohamed Ramadan and Hussain Moosa, calling on the Bahraini authorities to retry them in accordance with international standards of fair trial, and to stop extracting confessions under torture.

Based on the above, BCHR urgently calls on the Government of Bahrain to:

• Immediately refrain from the application of the Death Penalty against Mohamed Ramadan and Hussain Moosa;

• Establish a moratorium on the death penalty with a view to abolition;

• Investigate and prosecute all acts of torture, mistreatment, enforced disappearance;

• Establish procedures to ensure the fairness of all criminal trials and appeals.