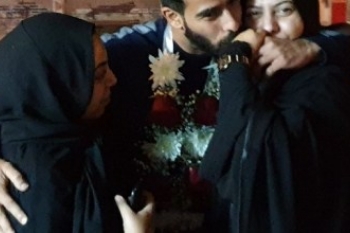 Since 2011, Bahrain has witnessed a serious deterioration of its human rights situation, especially after the closure of the democratic space, and the intensity of the security grip in dealing with the movement of peaceful protests, as the Bahraini authorities paved this through a series of local legislations that have been created or developed to serve that purpose.

According to the study prepared by the International Center for Criminal Policy Research in October 2016, Bahrain ranked first in the number of prisoners in the Arab world, with the number of its prisoners reaching about four thousand people, at a rate of 301 per 100,000 population.

The deteriorating conditions of prisons in Bahrain represented the other side of arbitrary detention, whereby the prisoners are held in correctional institutions that do not meet the minimum standard rules for the treatment of prisoners. According to the information received, the deteriorating prison conditions included all four official prisons in Bahrain, but they were heavily concentrated in the Dry Dock Prison (Preventive Detention Center) and Jaw Central Prison (Center for the Convicted), compared to the women's prison and the juvenile prison.

Nevertheless, the Bahrain Center for Human Rights continues to welcome any endeavours towards the release of prisoners who have been imprisoned against the background of their demands for democracy and human rights.

Specifically, on Tuesday evening, January 21, 2020, when the Bahraini authorities released some prisoners suffering from chronic diseases, with reports indicating that other numbers will be released in the coming periods.

The Acting President of the Bahrain Center for Human Rights, Mrs. Nedal Al-Salman believes that this and other similar steps are “positive”, and she called on the official authorities in Bahrain to continue to release all those who have been imprisoned since 2011 on political or related grounds to express their opinion and demands for reform and democracy.

The BCHR also reminds the Bahraini authorities to recognize the existence of prisoners they have, who have been convicted simply for exercising freedom of expression or peaceful assembly and demanding democracy and human rights. BCHR calls on the authorities to immediately release them, including the group of political opposition leaders who have been imprisoned since March 2011 and who suffer from chronic diseases as a result of prison conditions, detention and ill-treatment they suffered in the first months following their arrest, such as: Hassan Mushaima, Abdul Jalil al-Singace and Parweez Jawad, as well as many.

The BCHR also urges the Bahraini authorities to continue to fully respond to what is contained in the Universal Declaration of Human Rights, for what significant impact that has on building societies and establishing respect for human rights in them.