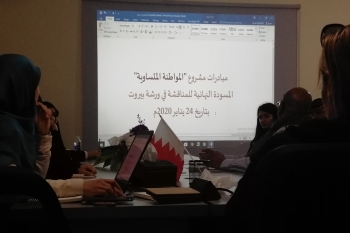 On Friday, January 24, 2020, the Bahrain Center for Human Rights organized a workshop in cooperation with Bahrain Interfaith and with human rights researchers on a paper prepared by the center on the creation of equal citizenship initiatives.

“A glossary of terms and concepts on homeland and citizenship” was presented and discussed by legal professionals, with copies distributed to all attendees. Sheikh Al-Salman then discussed the importance of equal citizenship and its role in resolving the crisis in Bahrain.

Following the introduction and preface, the session continued with the moderation of president of Bahrain Centre for Human Rights, Nedal Al-Salman, who also stressed the importance of implementing these initiatives, and presented them for launching the discussion.

The interaction of the participants on the topics was distinguished by the richness, diversity and multiplicity of opinions, where everyone participated in the discussions that took place on the violation of the law and if citizenship permits it, along with the state's obligations as well as the responsibilities of citizens, the relationship between responsibility and freedom, secularism, and other important topics that occupied the thoughts participants in the workshop.

This workshop has been held in the context of a number of programs and activities recently launched by the center in the previous period, and constitutes a key component.

The workshop touched on linking these concepts with the concept of active citizenship and how the citizen becomes a positive influence within the scope of his presence, whether geographic, tribal, or social. In addition, this workshop in particular, aimed to achieve the following:

• Urging initiatives that the government and non-governmental agencies need to promote concerning of equal citizenship in Bahrain.

• Launching at least of 10 initiatives that are hoped and expected to have a corrective and positive impact on the human rights situation in Bahrain with regard to the issue of equality and non-discrimination in the country.