Bahrain: the death of two persons within days due to illness they suffered while in prison 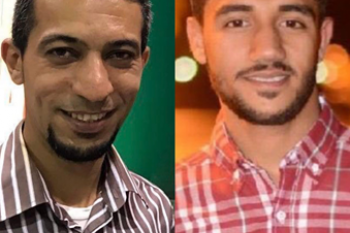 Monday 03 February 2020, Sayed Kadhem Abbas Hashem, aged 23, died as a result of suffering from the illness he had sustained while he was detained by the security authorities since 2015 on charges of illegal gathering and riots.

Sayed Kadhem developed a cancerous brain tumor while he was in prison, which led to the deterioration of his health, and his family reports that he did not have any health problems before his detention, but he started complaining of pain in his head continuously. His family asserts that whenever he complained to the prison administration about what he was suffering from and demanded to be taken to the hospital, he didn’t receive any response and was told: "You suffer from nothing". His family says that they have repeatedly appealed to the prison administration to provide the necessary and adequate health care to their son and transfer him to the hospital, but to no avail.

Sayed Kadhem suffered from the deliberate delay in providing medical care by officials at the Jaw Central Prison, a prison where convicts are serving their sentences in Bahrain, and he was suffering from severe pain in the stomach, back, and nose. Only when these pains increased abnormally, the prison administration took him to the hospital, where he was told that he had a cancerous brain tumor.

In 2018, he was operated and subsequently lost his sight, and in July 2018, he was released after his health deteriorated until he died, on Monday 03 February 2020.

In 2015, Sayed Kadhem was arrested from Bahrain International Airport, after which he was severely tortured and sentenced to 10 years of imprisonment for riots and illegal gathering before the sentence was reduced to 5 years; he served 3 years of the sentence before being released due to his health situation.

One of the persons who shared the same prison as Sayed Khadem reported to the Bahrain Center for Human Rights (BCHR) that: "Sayed Kadhem was always suffering from back pain and severe headache and he kept asking the prison officials to take him to the hospital for many continued hours, but to no avail. When his condition worsened, Sayed Kadhem began to vomit loudly, and prison officials came to him not to take him to the hospital, but to make fun of him, saying: “What an actor you are!” and they laughed at him”.

The witness reports that many times, Sayed Kadhem was waking up from his sleep in the middle of the night due to the severity of the pain he was suffering from, and his brother who is convicted in the same cell asked the officials to take him to the hospital, then the officials came and took him out of the cell and forced him to walk when he could not even move from the pain. The officials used to take Sayed Kadhem out of the cell not to take him to the hospital but to leave him in one of the prison corridors to suffer and sleep on the ground until the morning when he was brought back to his cell. When officials brought him back, they told his brother: "Your brother has improved his condition so tell him to stop lying and acting again, or we will transfer him to the solitary confinement."

Sayed Kadhem is the second victim of the negligence of the authorities in providing the necessary health care to prisoners. Last Friday, 31 January 2020, Hamid Khatem died, after suffering from stomach cancer after his arrest and neglect of his health condition by the prison administration. He was released in 2017 and traveled directly to India for treatment where he passed away.

In 2016, Hamid Khatem was arrested on charges of insulting the King of Bahrain via tweets he posted on Twitter, and in the same year, he was sentenced to two years in prison in the same case before the sentence was reduced to one year.

BCHR considers that what Hamid Khatem and Sayed Kadhem Hashem were exposed to reflect the situation and the real environment in which prisoners live in prisons and detention centers, where dozens of prisoners in Bahrain suffer from delay and neglect in obtaining medical care by the prison administration. Many of them resort to go on hunger strikes to demand basic rights such as the right to medical treatment, which usually results in the prison administration punishing them by preventing them from family calls and visits or by transferring them to solitary confinements.

There is no doubt that obtaining medical care inside the prison is a basic right that the prisoner must obtain without effort, and in accordance with internationally guaranteed and legitimate rights. BCHR considers that the failure of prisoners to obtain the appropriate medical care and treatment is a clear violation of the United Nations’ Standard Minimum Rules for the Treatment of Prisoners while the documentation of two deaths due to failure to receive timely treatment is a contempt for these rights and those involved in this must be held accountable.

Accordingly, the Bahrain Center for Human Rights calls on the  Bahraini authorities to: